I have some work to get done, but I know I’ll have the afternoon to explore, so I go down to breakfast and try to make friends. There I meet a New Zealand girl named Caitlin who doesn’t have solid plans, so I convince her to go with me to Crazy House and Maze Bar.

Crazy House — also known as Hằng Nga Guesthouse — is sort of like Vietnam’s Winchester Mystery House, except fewer hauntings and more creative architectural genius. It’s this sprawling set of several buildings that get you totally lost — hallways that lead to staircases that lead to narrow bridges to rooftops. There seems to be an overview that you can get when you walk in, with a guide explaining where to start, but Caitlin and I missed that and instead just wandered where ever — separately — and I was walking like my life was in danger on some of the higher bridges.

Think of it like a maze-y, nature-celebrating, fairy or troll house. 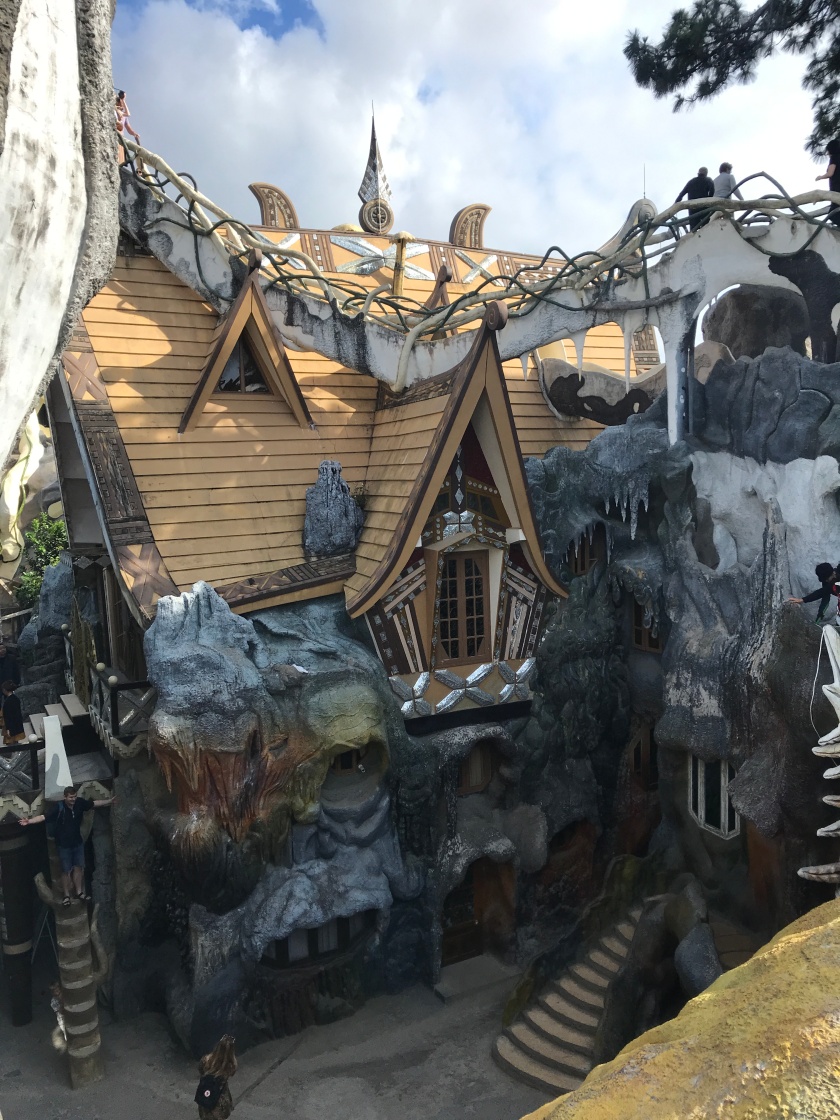 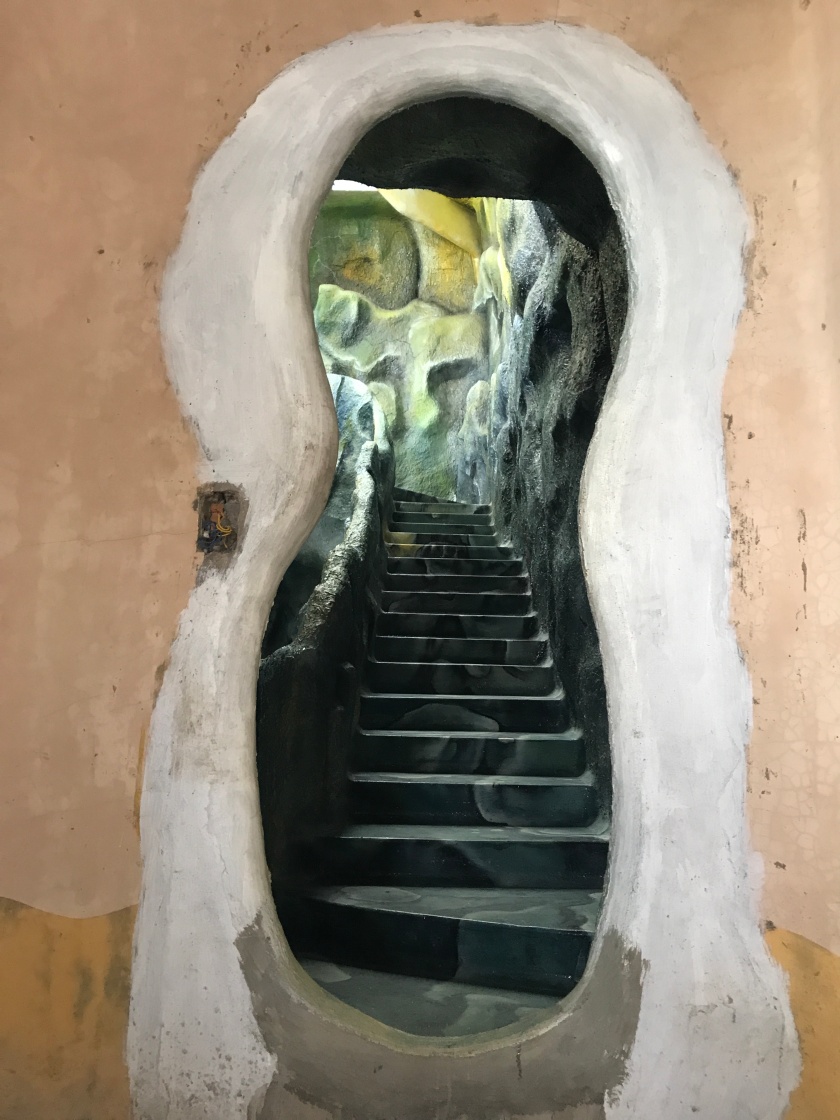 Crazy House is also a hotel, and you can rent a room starting at $50 USD a night. I was going to try to stay there (I thought it would make an interesting story) but they were sold out. Turned out that was probably a good call (I’ll get to that.)

Afterward, Caitlin and I walked back toward our hostel to Maze Bar, also known as 100 Roofs Cafe. It was designed by a student of the woman* who created Crazy House, and it is literally a maze inside of a cafe/bar. You have to buy a drink to enter, and then you’re free to explore six stories* of nooks and crannies, with steep, small staircases taking you higher and higher. We crawled through a hole to reach one floor, saw tons of interesting carvings/sculptures, and it was just a fascinating place to be. We probably spent an hour or more there. At the top is a really beautiful garden, also maze and nature themed. 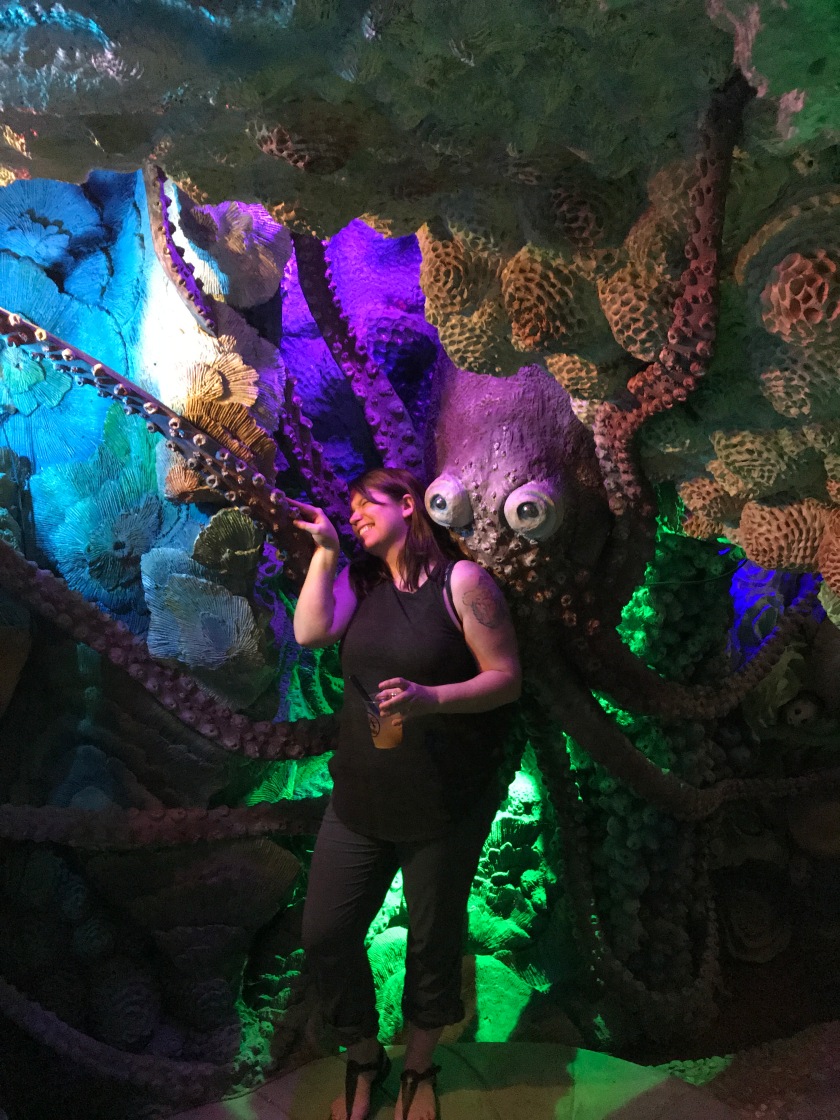 It was really difficult to get any photos of the maze bar because it was so dark, so here’s a picture of me pretending to get attacked by an octopus art piece inside of it. 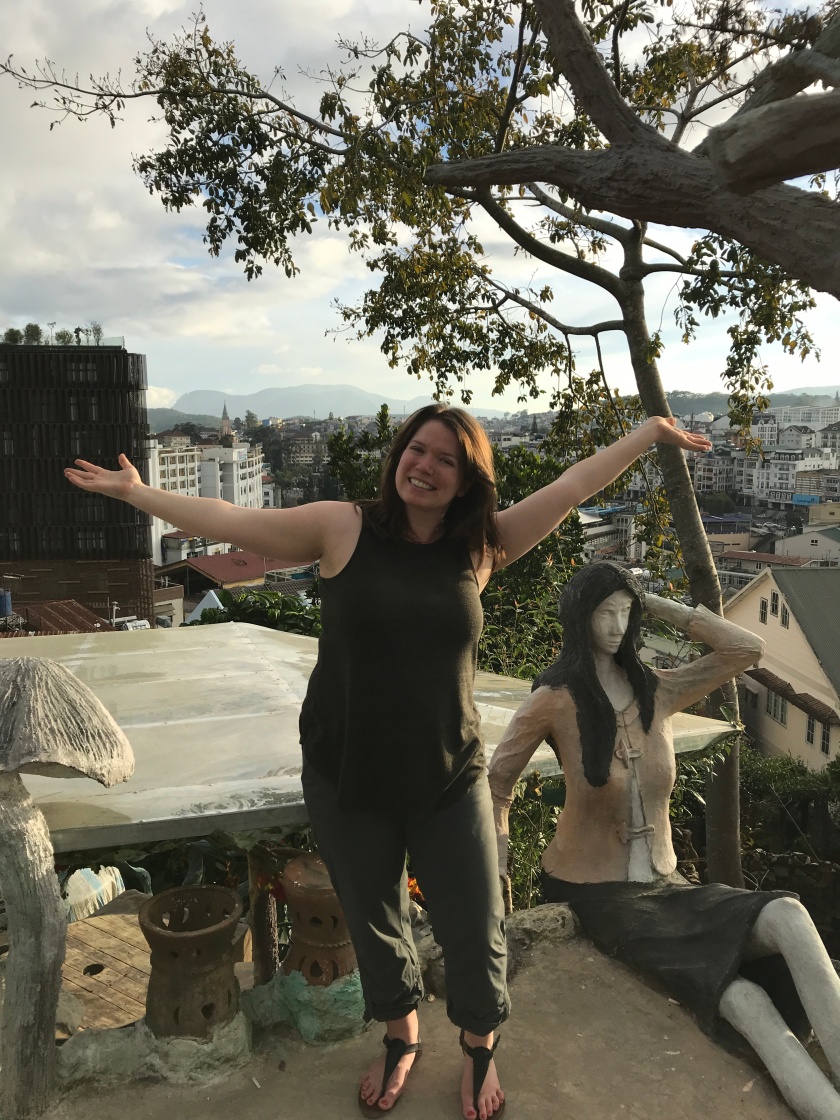 Me at the top of the garden

Then we rushed back to our hostel to sign up for family dinner, and I needed to do some more work on an article. On the way, this group of local kids chatted with us briefly in English. “Hello, hi!” they said. “High five!” We high-fived. “Have a nice day!” It was really cute. I haven’t had many interactions like that — there are tons of tourists around the places I’ve been in Vietnam so I don’t think we’re much of a novelty — but it was fun to hear them practicing their English.

I squeezed in a bit more work before dinner, ate, and went to bed early to finish an article. I’d signed up a tour of the city the next day and it was early, so I got to sleep. But around 2 a.m. I woke up feeling nauseated and spent the next several hours in a “Will I? Won’t I?” puking gamble.

Turns out: I didn’t puke, but I continued to feel like I was going to. That’s the second time I’ve gotten sick on this trip — the first was a brief 12-hour lower GI clear-out — and I was miserable. I hate feeling nauseated more than pretty much any other symptom, and even though I’m usually anti-medicine and prefer to let things run their course, travel has brought out the Western medicine worshipper in me. Back home, when I have a headache, I take a nap. Here? I have a headache, I take paracetamol. At home, if I’m sick, I let myself be miserable until it’s over (last summer I had a cough for two months and waited 45 days before I called — didn’t even visit in person — a doctor about it.)

But here? No. It’s hard enough (even though fun!) to be doing all your own planning, figuring out a whole new place by yourself (with the occasional random new friend) without being sick on top of it. I fantasized about being home, texted Mark whiny messages, sent videos of myself looking miserable to my friends. I considered whether I would have to cancel my trip the next day, maybe my plans to visit Cambodia altogether.

Then around 10 a.m. I dragged myself to a nearby pharmacy, which first gave me Immodium (useless for nausea) and then gave me domperidone, which isn’t legal in the U.S. but is legal in other countries (Canada, UK, etc) for treating nausea. I’m not a doctor, obvs, but I took it for 24 hours (admittedly half-delirious) and it saved me. I basically slept for the rest of the day, canceling my tour of the city, but was well enough to take a flight to Siem Reap the following afternoon.

I’m not clear on what made me sick – ice? food? touching something and not sanitizing my hands fast enough? This country is giving me a whole new level of respect for immune systems, germs, and sanitation practices I take for granted back home.