After a day in Haiphong, I take an early morning flight to Da Nang airport and then a car to Hoi An. There are other, more scenic ways to travel but the hour and a half flight was (I just double checked this because I couldn’t believe my bank statement) $18.40, and uh… yeah.

Hoi An had been really high on my list, but I still didn’t really know what to expect. The weather was quite humid, and I was pretty beat, so I had a casual day and wandered around without the goal of seeing anything in particular. 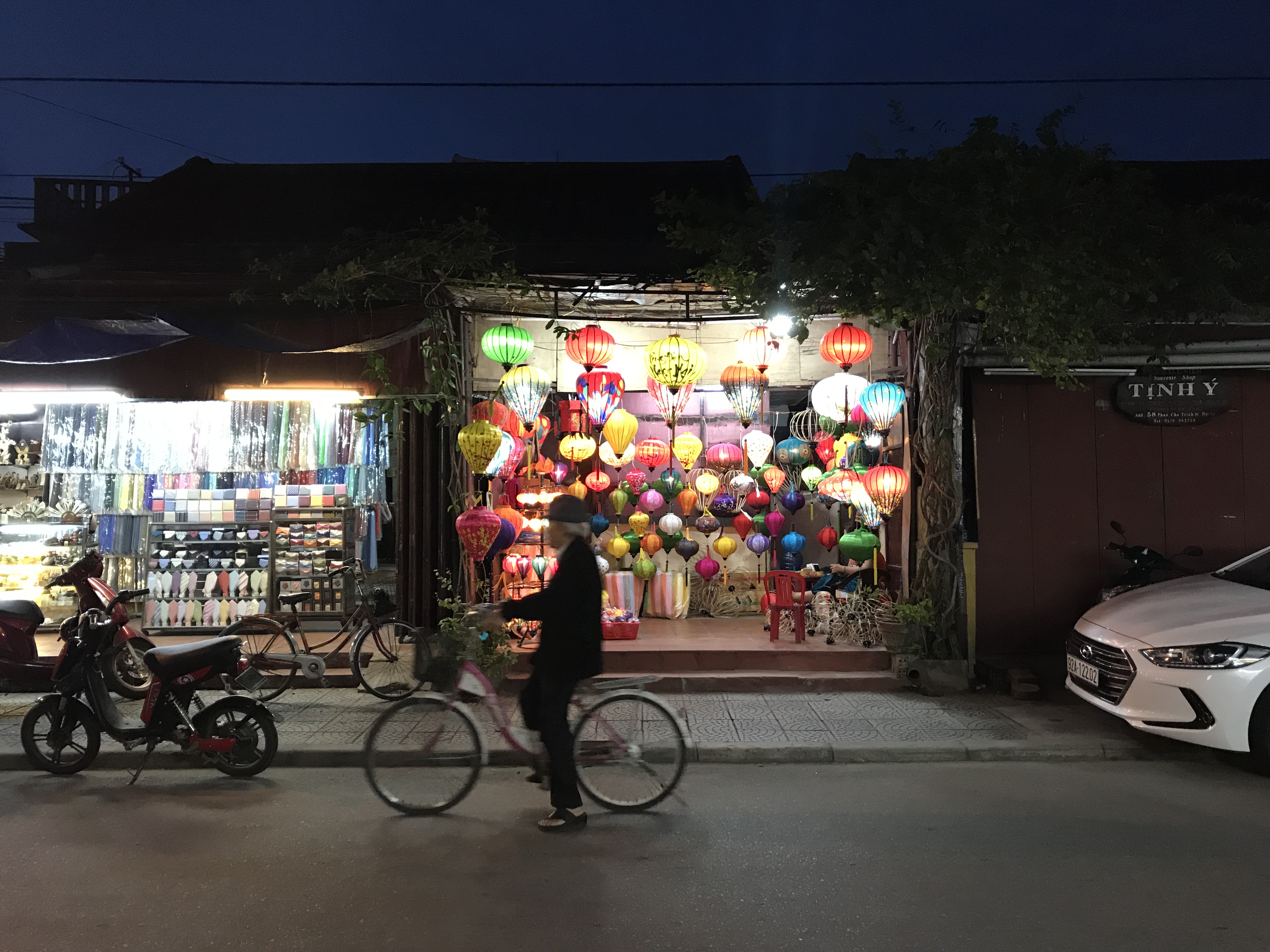 Here are a few things Hai Phong is known for:

Well, my first day a very friendly woman was riding past on her bike and told me to visit her tailor shop, and before I knew it I was buying a shirt, a dress, and a pair of pants for a total of $105 USD. She told me to come back the next day at 6 p.m. for the first fitting.

After dropping a fair bit of money, I decided to keep the party rolling and she walked me over to a massage salon where I got a 60 minute massage, had my first-ever pedicure and had them clip my fingernails because I didn’t pack nail clippers. All told it ran me 580,000 dong, or about $25.

Even though that is beyond cheap, I proceeded to mentally beat myself up about spending so much money for several more days. There are two elements to that: One, my brain’s fondness for self-flagellation, and two, how quickly your (read: my, but it seems to be a common thread among travelers) brain spins out about money here, and about what something is “worth.”

“I wouldn’t pay more than 30,000 dong (less than $2) for a beer,” another tourist told me my first day in Vietnam, when we pay $6 and up for a beer back home without blinking an eye. I’ve caught myself doing the same — I paid 85,000 dong to have my laundry done at one hotel (around $4), and wondered if I should walk around town to see if I could find a better price (nah). Mark and I paid $30 to have our laundry done on the Mediterranean cruise we took earlier this year.

Hoi An is “expensive” compared to other cities — I regularly spent 100,000 dong on dinner (about $4.30 USD) and felt like I was somehow blowing through money. I also got confused about the exchange rate — I’ve been pulling 2 million dong out of the bank thinking it’s about $200 USD, but then I’d spend it in a day or two.

And I’m going to be honest, even though I have (irrationally) been freaking out about money, I’ve also been judging other tourists. At the night market, someone was asking how much a cup of rolled ice cream (very cool — they pour thick milk onto a frozen surface, chop fruit into, and freeze it on the spot in a flat layer, then use a scraper to curl it into little wraps.) Cost: 30,000 dong, $1.29 USD.

“Why so expensive?” the tourist asked. “That’s ridiculous.”

And I couldn’t help but think: Motherfucker, you can’t get a soft serve from McDonald’s for that cheap.

I’ve heard other people brag about managing to get the “local” price for good or services or haggling for the equivalent of $1 USD.

On the one hand, I am traveling rather cheaply — staying mostly in hostels (I have splurged for a cheap private room a few times), choosing to walk rather than take taxis, etc. I’m here in large part due to the incredible exchange rate, which allows me to visit longer. I understand that everybody has a budget.

But I also don’t want to come to Vietnam and pat myself on the back for not spending money. I’ve worked in tourist towns. I’ve lived off tourist money. I don’t want my takeaway from visiting this country to be that I somehow managed to pull a fast one and never spent a dime more than necessary.

The next day, I went on a tour to My Son Sanctuary (closer to “me song” than “my son”, but don’t ask me for pronunciation advice, my tonality is god-awful). The temples here are up to 1700 years old. There used to be more than 70, rediscovered by a Frenchman in 1898, but during the Vietnam-American war many of them were destroyed and only a handful remain. The next few days are a bit of a blur. I picked up my tailored clothes, which look really nice and fit fabulously. I made friends with one of my dorm mates, Harriet, and we went to dinner. Whatever we ate made us both almost immediately sick.

By the next day I was mostly OK (I broke my no-Western food goal and ate French toast for breakfast) and risked a guided bike tour out of Hoi An town to a nearby island village. I’m so glad I did — I had an incredible time with Sanh from Hoi An Adventure. I visited a family who makes rice noodles and rice paper in a semi-traditional manner (most is made in machines these days) and got a chance to try it myself. I met a woodworking artist who enthusiastically showed me around his shop, holding different art pieces up to my nose so I could smell the different woods, burning strips of different statues to release their scents. He helped me carve my name into a piece of wood. Then my guide, Sanh, and I biked through farmland to visit a family who makes traditional floor mats and showed me how the loom works.

A few things Sanh shared with me:

Afterward, I found out that Zwen and Stella were in town, so I went to dinner with them — where we bumped into Ramona and Florian, two Austrians who were also on the Cat Ba boat, and joined forces with them until around 10:30 p.m.

This morning I walked to a Western-style cafe owned by an Australian with my dorm mate Harriet and then have otherwise been killing time until my sleeper bus to Da Lat. That trip leaves at 5:30 p.m. and takes 14 hours, so… wish me luck.