Not as much to report today as it was mostly a travel day. I fell asleep around 11 p.m., woke up at 2 a.m. to a nightmare that I’d had to tackle my dog out of the way of a moving vehicle, and didn’t fall asleep again until 5 a.m. Made the relatively mild 8 a.m. wake-up time to get ready for my bus a little rough.

I am noticing that Vietnam seems to be a very nightlife-heavy place — not just party stuff, but even going out to eat seems to be a late night activity. I swear the karaoke bar in Hanoi didn’t even get going until after 10 p.m. and the voices in the hallways didn’t quiet until four in the morning. Might have to fight my early bird tendencies eventually, but not today, because it’s 7 p.m. and I’m knocking out this post in an extraordinarily firm bed and hitting the hay directly afterward.

It took four hours to get from Hanoi to Cat Ba island. Cat Ba is an archipelago (series of islands), the name of the largest island in that archipelago, and the name of the main town for tourists on the island. It’s also the name of the national park on the island. I’m here because I’ll be taking a junk boat overnight cruise around Ha Long Bay (you’ve probably seen pictures of this area, as it’s gorgeous and a UNESCO World Heritage Site) and Lan Ha Bay, and then likely doing some trekking in the park before heading back to the mainland.

I left the hostel at 10, but not before seeing a mouse run across the lobby floor. I jumped. I’ve lived in houses infested with mice before so it’s not like it’s new, but I’m out of practice. The hostel manager (possibly owner?) just kind of looked at me as if he were wondering if I were going to complain. Nah.

The bus ride was pretty uneventful, in no small part because it had WiFi and so I got lost in my phone. How many times can you refresh an app? About 200,000 times when you’re surrounded by other tourists who may or may not speak your language and have their own people to talk to. Eventually, I felt like an infinite scrolling monkey and switched to a book, which was basically the 20th century’s way of definitively ignoring your surroundings. Supposedly some hostels have book exchanges but I haven’t seen any yet.

We stopped at a rest stop and I ate food cart banh mi. The bathroom didn’t have toilet paper — that seems to be common for public bathrooms, which I’d heard about, and packed toilet paper, but also keep forgetting to put it in my day bag.  Eventually, we arrived at a small ferry boat called a hydrofoil, which loaded on our tour bus and several small scooters and cars.

I got to the island and checked into my hotel, which was a whopping $12 for a massive bed and private bath. There’s even a hairdryer – luxury. One interesting commonality between the hostel and this hotel is that the bathrooms don’t separate the shower and the toilet. There is no bathtub or shower floor. Instead, the shower just sprays directly onto the floor and slowly drains into a grate in the corner. Theoretically. Mostly it seems to just mean a perma-wet floor.  In the hostel, there was a divider (quite literally like the stalls in a U.S. public bathroom), which added an extra je ne sais quoi to tromping across a wet floor to go pee in the night.

After taking a shower I headed out to explore Cat Ba town. Obviously I’ve never been here before, but it seemed pretty clear that it’s the off-season — or maybe everything will seem deserted compared to Hanoi, I’m not sure. A good chunk of the storefronts and hotels are under constructions, as are pieces of the roads. It feels very much like a touristy beach town, made up primarily of hotels, restaurants, and tour operations, sometimes all in the same lobby. There’s not as much of a mixture between locals and foreigners here. At one point, I did watch a multicultural soccer game break out, though. 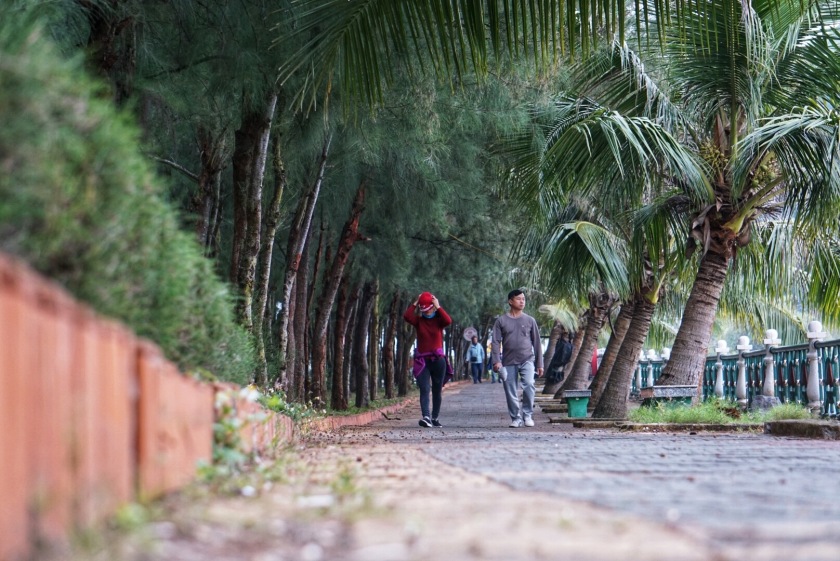 I wandered around and took pictures for a while and then found my way to a restaurant. I avoided the restaurants on the main drag, even though they were some of the few places that had people sitting around. I’m not entirely sure why. It’s the weird trigonometry of exploring a place, I guess: wanting to eat from the place you’re visiting, but you also wouldn’t mind talking with a stranger, but many of those strangers already have someone to talk to, and also you feel judgey about a place serving burgers and pizza, even though you will probably end up desperate for some Western food before your trip is done.

Anyway, I ordered Bun Cha and a beer, and the beer was bigger than the meal, so I also ordered dessert (mango sticky rice.) You know, for balance.