I wake up and write a long, picture-filled description of where the elusive BLM camp is located, and then Dexter, who wakes early and gets walking texts me: uh, we were in the wrong place. I quickly edit my post and take photos of the real camp. Hopefully that helps. 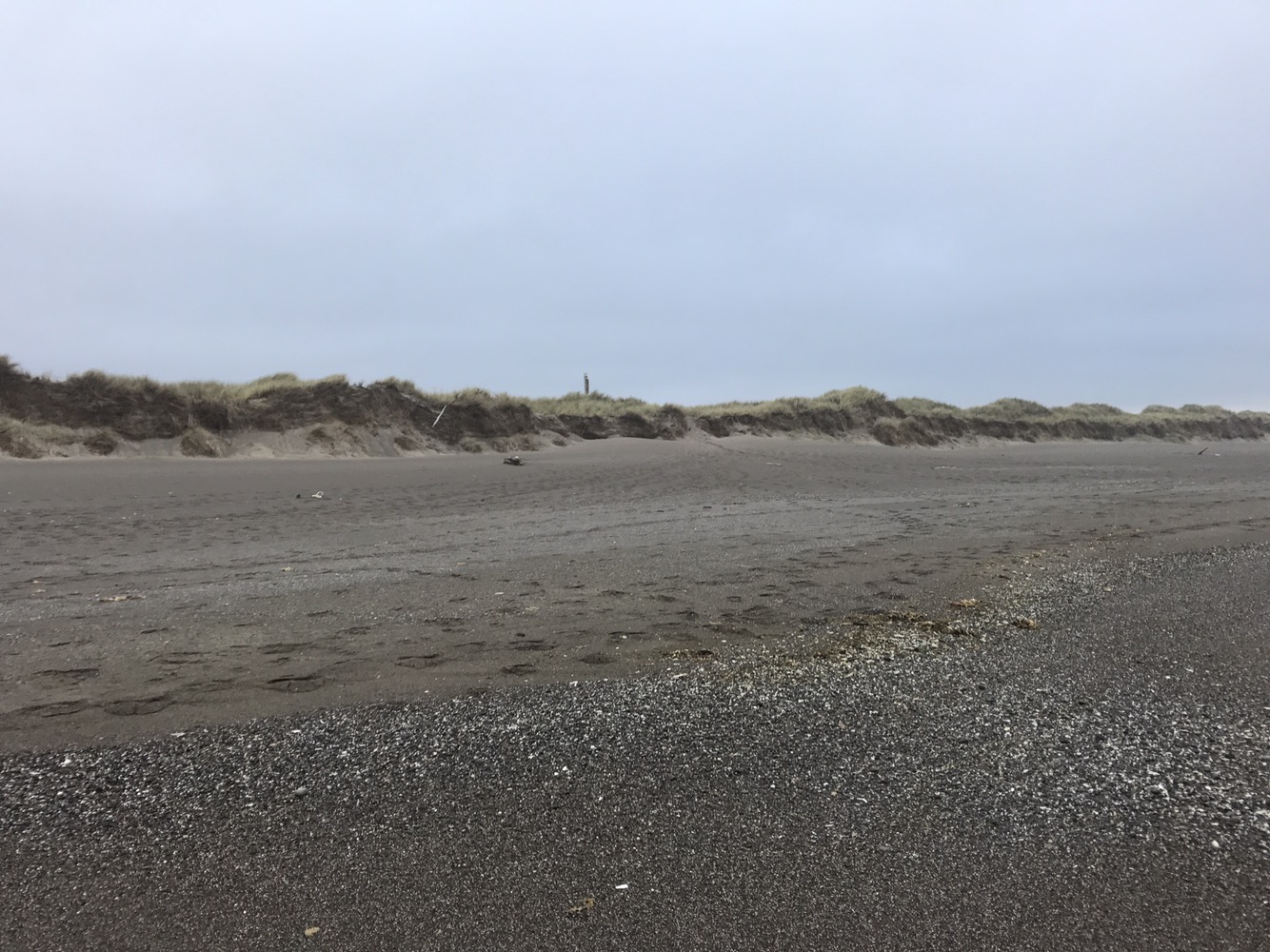 It’s another long sandy stretch and then into the forest, glorious forest. We explore Blacklock Point a bit. An older man day hiking tells me some of the history of the area. Whenever we get out of the trees, the wind nearly knocks us over. I’d like to go further out into some of the rocks but they seem too narrow for the wind.

We continue down Black Lock Point and run into some other hikers – we’re going the wrong way, they say. They’d just done the same thing. We should have gone down to the beach from Blacklock instead of going down the trail. Oh, OCT and your confusing signage. We go back – luckily not far – and head down to the beach, where quickly we run into Sixes River. We’ve been told it’s only crossable at low tide (including from a helpful dayhiker familiar with the area) but I scout it out anyway, looking for the widest part, because who knows? And… nope. I get in above my knees and the river is wide and it is windy and cold and I decide I don’t feel like testing it any further. Instead, we sit and wait behind a wall of sand on the river bank to block the wind. The other hikers, two guys, are standing at the mouth of the river and look like they’re going to try it. They disappear for a little while and I start packing my things thinking they’ve made it across… until we see two backpacks bobbing back into view. It was too deep, they say.

For nearly two hours we all sit, and then I get bored. It’s still an hour or two until low tide but I pack my things and walk over. The mouth of the river spills into the ocean and the ocean washes in and adds an extra six inches of depth. I ask Dexter to take off her pack in case she needs to rescue me. The incoming waves freak me out so I try to cross more toward the river, but there it’s deep and I don’t feel great about it. I want to try to cross where the waves come in and recede but I’m trying to time in right when Energizer Bunny gets impatient and starts walking across. She’s half way when I remember that she almost drowned in the Sierra and that freaks me out, so I tromp in after her and we walk all the way across. It’s actually not that big of a deal. Nice. Dexter and the two guys follow after us.

It’s still super windy and it sometimes makes us go faster and other times nearly blows us away. We find a small trail at the end of the beach and follow it up, and then take the trail into the campground. Along the trail are wildflowers and they’re pretty so I pick a few, making my own bouquet. I also found a sand dollar earlier. When I get to camp I set them on my post. Home sweet home. 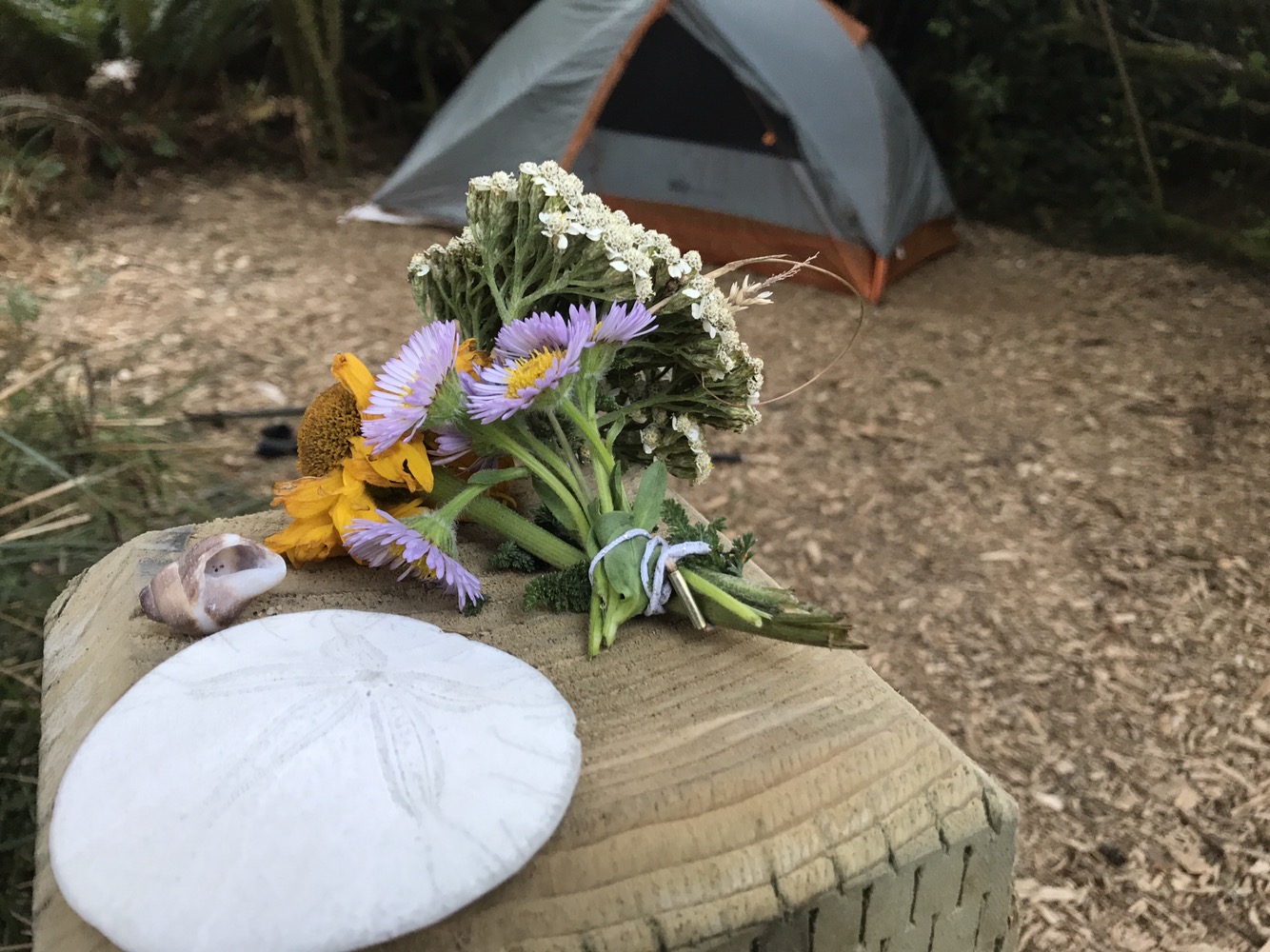 A woman hiker we haven’t met before, Sonia, is sitting at the picnic table. We start chatting – she’s hiked much of the PCT and other trails and always does it solo. I share some of my weird feelings about PCT culture and she has similar feelings but has mostly she’s been able to handle it because she has found a way not to care. I tell her my plans to get back on at Crater Lake and she approves.

Energizer Bunny and Dexter want to get up early in order to pass a section of trail at low tide… but I don’t feel like rushing. I tell them not to wait for me. Sonia says she had a ride into town and if I take a slow morning, I might join her.