Something I am learning about this group: we never leave when we say we will. We say 7, and we really mean we’ll eat breakfast at 7. We’ll leave at 7:30, or 8. But it doesn’t matter much, anyway, because it’s not hot and we don’t go far. So 8 it is.
I have an awesome time on the beach walk. I listen to a good podcast, then my audiobook, and admire the waves.

We get to a lookout and I ask a stranger about the upcoming town. “Do they have somewhere to buy a hat?” I ask. “Mine blew away.”
“Probably…” she says. “What are you looking for? Just a baseball cap? I have one of those in the car. You can have it if you want it.”
“Seriously??” I say. “That would be amazing!” She pulls out a camo hat that says “Alaska Sportsman’s Bear Trail Lodge.” I thank her again, and we chat a little about how long she’s lived here, and then we keep walking. Not long after that, we enter Depoe Bay, a small community near the ocean and we see a crowd of people at the wall by the sea. What are they looking at? And then I see a plume of water shoot into the air in the distance.
Whales! They’re looking at whales!

​​
We’d passed one of the “best spots” for whale watching earlier in the trail and the rangers said they hadn’t seen any whales in weeks, so we’d given up hope. But there they were, at least two, putting on a show. I live streamed it on Instagram (poorly, because I was watching in real life, not through my screen) and one of the grey whales came close close close to the wall. There were several tourist boats getting close the whales, too, which made me wonder if the companies have some kind of device to let them know where the whales are in the water.
Once the whales moved on, we were hungry and so went to a restaurant and then continued on. We were lucky enough to see more whales as we walked, their spouts of water and backs rising above the waves. 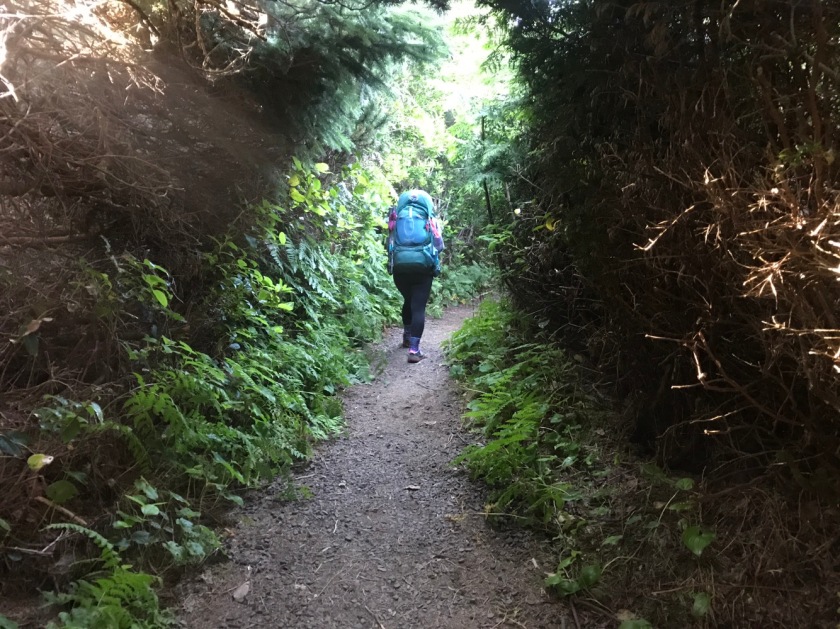 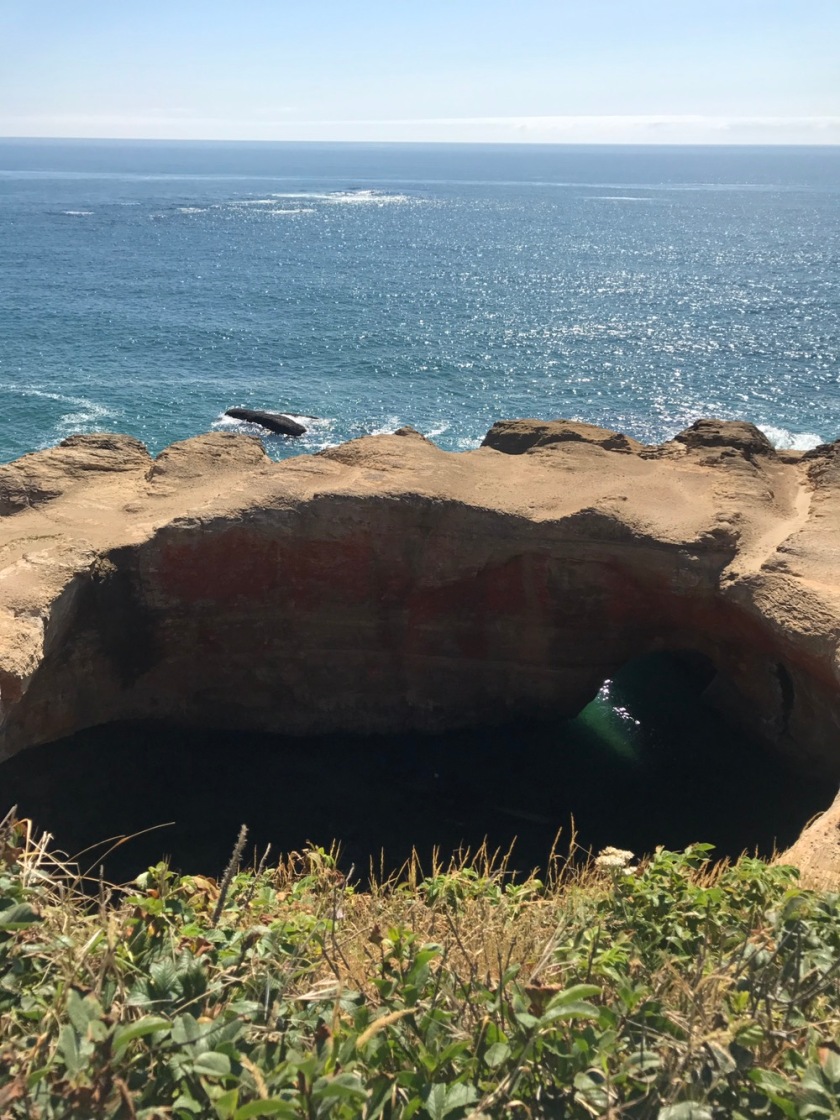 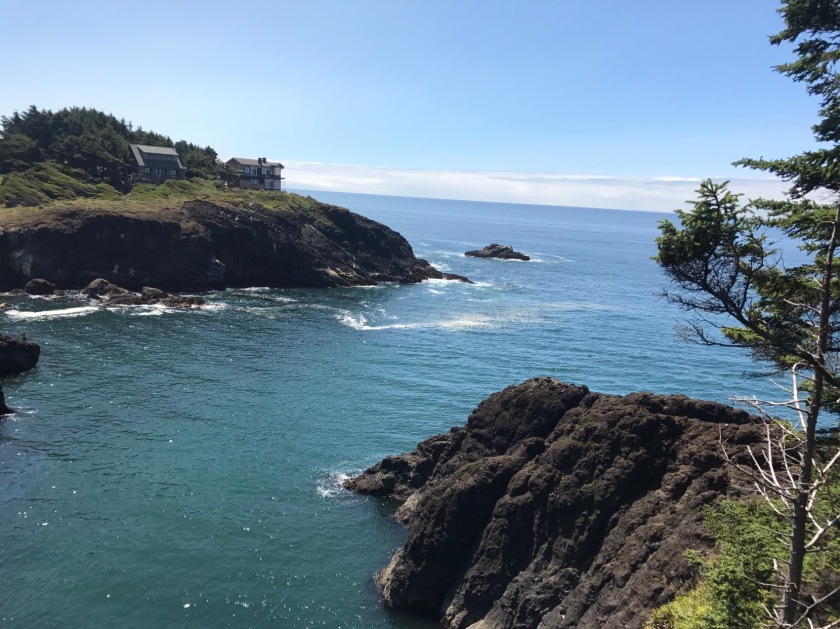 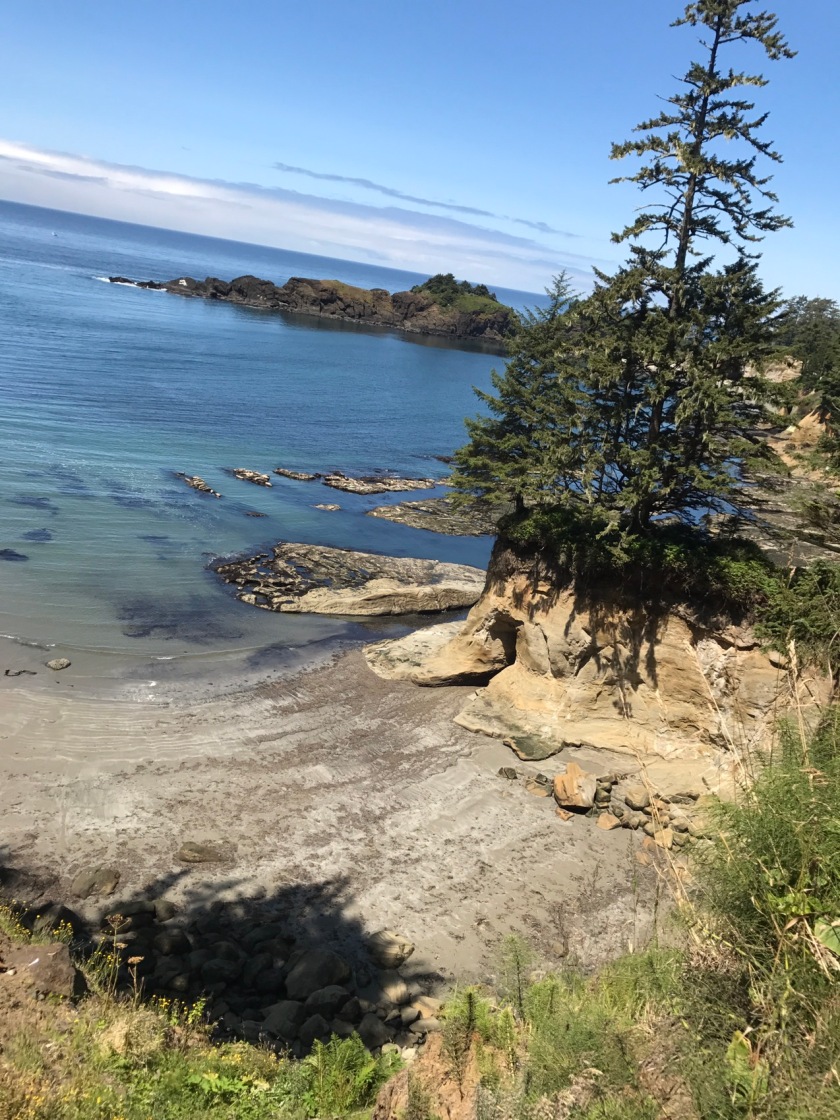 It’s been a pretty epic and beautiful day, and as we’re walking the last stretch toward Beverly Beach State Park, my brain starts having a conversation with itself.
Hey, it says. Remember how you’ve been trying to figure out what to do when you go home? And you’d thought of some things you can do while you’re waiting for the next thing to happen? Work at a bookstore? REI? Freelance? Wait until you have a good opportunity to move?
Yeah!
And then my body goes a little haywire. No! No! No! Red alert!
I try to untangle what’s happening. And I get a little clarity:
We (when I talk about myself in these moments I tend to use we, like me, the conscious plan-making feet-on-the ground human and me, the more woo-woo body-knowledge gut-tug entity) can’t live in Phoenix anymore. We’ve waited too long. Arizona is a black hole, now, and we have to spend too much time running against its gravity.
We need to rearrange our priorities. No more thinking “job first” – life first. The job is what you use to make money. It is not your life.
Write. Write write write write.
I feel like a bit of an idiot saying these things, privileged, navel-gazing, self obsessed. And still the tangle in my gut is loud and cares little for the eye-rolling my head is doing.
Head: People don’t get to just make those decisions. You could royally fuck your life up. Everyone will watch you fail.
And still, my gut: Yes. Maybe. We have to try.