We get up around 5 and immediately head up steep switchbacks, but they’re dry and so I’m happy to have them. The group waits for me where the snow begins and Co navigates us through trees and sun cups around Bullfrog Lake. At one point I get ahead of everyone and it’s unclear which direction to take, although I can see on my GPS the general direction we’re headed, and the pass we need to get to – but there’s no footpath and I want us all to stay together so I wait for them.
“I’m pretty sure the pass is over there, but I’m not sure which way you’d rather go.”
“No,” Co says. “We have to go around the lake.”
But as we head around the lake she realizes where the pass is and starts taking us in the direction I’d pointed out. This is the hard part of new groups – nobody knows if they can trust you or not. 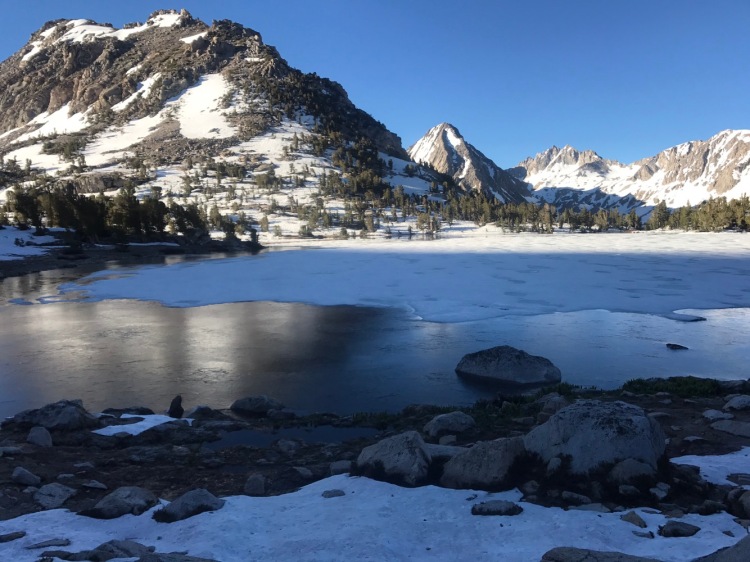 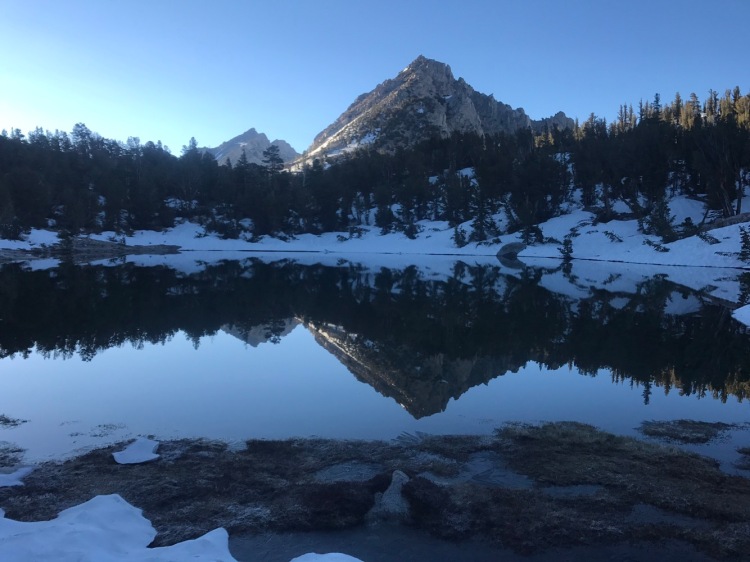 It’s a mostly uneventful walkup except for a steep snow shoot surrounded by rock scrambles. At first Sole and I try to scramble up some boulders but I quickly decide it’s more effort than it’s worth and cross the snow, where LiterBit and Co are scrambling up some loose rock and dirt – my least favorite. They try to tell me how to get up the scramble but I’m looking at the snow thinking that it seems way more secure. After debating a bit with myself, I decide to go for the snow, even though it’s steep. It’s the right decision for me. My spikes are grippy and Forester has taught me how to work with my ice axe and I move slow but I feel confident on the ice. We get to the top and I feel redeemed – I am not a helpless hiker in the snow. I am capable. 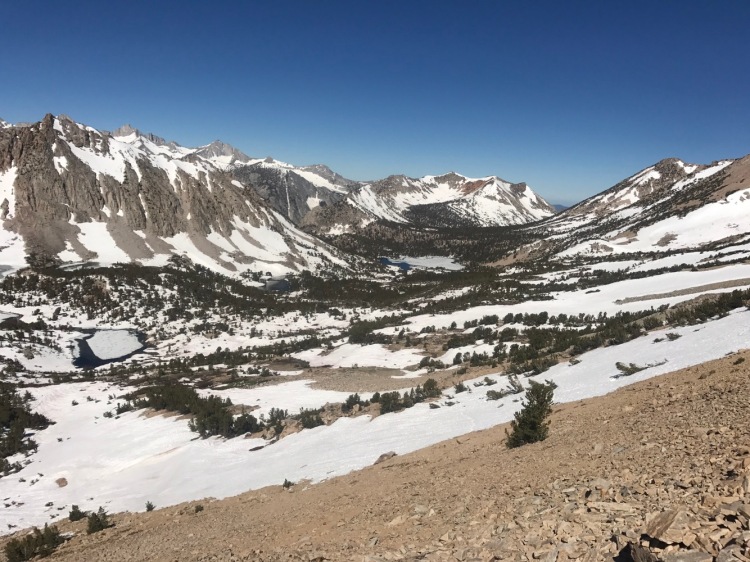 Of course, heading down Kearsarge is slushy and steep and scary and LiterBit heel-kicks steps into the snow for me to use. There are a few glissades that are fun and a little sketchy and we take turns almost running into rock walls or almost sliding off edges around corners.
It feels like it takes forever to get to the Trailhead, but I’m still happy to be headed there because I know I’ll be getting to town. The last switchbacks in particular, even though they’re dry, seem never ending. 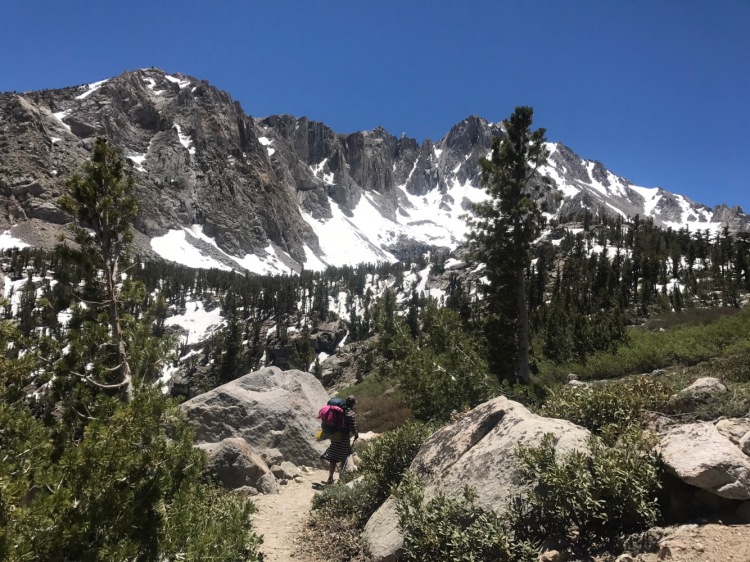 My feet are wet from snow and streams that run down the trail and they start to hurt from being wet for so long. When I get to the parking lot I put on dry socks and walk to the end of the road closure without shoes.
There, the Swiss Boys and Taylor are climbing out of a car. It is good to see familiar faces. The man who gave them a ride is Santa’s Helper, a section hiker who took time off trail to shuttle hikers around. I ask if he can give me and the group a ride and he says yes. We wait for them and eventually they turn up, but they’ve already found another ride with a day hiker. Another hiker named Denied starts to walk by and I ask if he wants a ride and he says yes and climbs in. Yoav and Dean pull up and we hug and Yoav shows me a video of him glissading for a solid 2 minutes down Whitney Portal, which is insane. Then they hike on. Denied and I chat with Santa’s Helper while waiting to see if any other hikers come by. They don’t. So we head to town.
Santa’s Helper drops us off at the hostel but the group is having lunch at a diner so I go join them. We’re all unshowered and when I walk in a man waves his hand in front of his face as if to say, “you stink.” Ah, to be hiker trash. We all go back to the hostel and decide to share a private room. I shower last because they’re headed out for drinks and I’m going to stay in to call Mark.
The call with Mark is good. I miss him, but I know that I want to keep walking, that there is something about being out here and having the chance to walk, to carry everything I need on my back, that is necessary right now. I am not ready to go home.