It’s cold in the morning and I’m reluctant to get going. Around 6 I will myself to start getting my pack together. I decide to pack it differently because it had been pulling on my shoulders yesterday. So now food is going near the bottom, instead of at the top. There’s frost on my rainfly that I try to shake off, but I have to pack it away wet anyway.

When I get out of my tent I see that all the other hikers are gone except for Scissors, Mousetrap and Rawhide. Rawhide packs quickly and I leave only a few minutes before her. We make plans to camp under 15 miles.

My mood is better today. I’m not kicking my heels in the air but my brain isn’t as much of a downer. I’m enjoying going my own pace and not worrying about who is ahead or behind me.

Still, a few miles in and I’m fantasizing about different things that could get me off the trail. I find a small bug that might be a tick on my shirt and think, Lyme Disease would be a worthy reason to quit…

I see a group of people sitting around and I assume it’s a bunch of thruhikers so go to sit with them only to realize they all look like they’re in high school. I sit anyway and find out it’s a school on a 5 day backpacking trip. They’re cooking pancakes and I eat a muffin and then move on. Later, I hear them come up behind me and I see that they’re hiking in a tight line and it makes me laugh a little, because even thruhikers who are hiking together don’t hike that close.

I catch up to Rawhide sitting in the sun drying out her sleeping bag so I pull out my tent to let it dry. We realize there’s a campsite at 19 miles and it’s mostly downhill, so we change our plans to go for it. I tell her about my quitting fantasies and she says she does the same thing, today hers was about a bear tearing apart all her gear searching for food and not having enough money to replace it.

Another train of thought that lasts a while is: If I were doing the Camino, I’d almost be done by now. I’d have delicious dinners every night. I probably could have convinced Mark to come with me. I wouldn’t have to carry 10lbs of food… 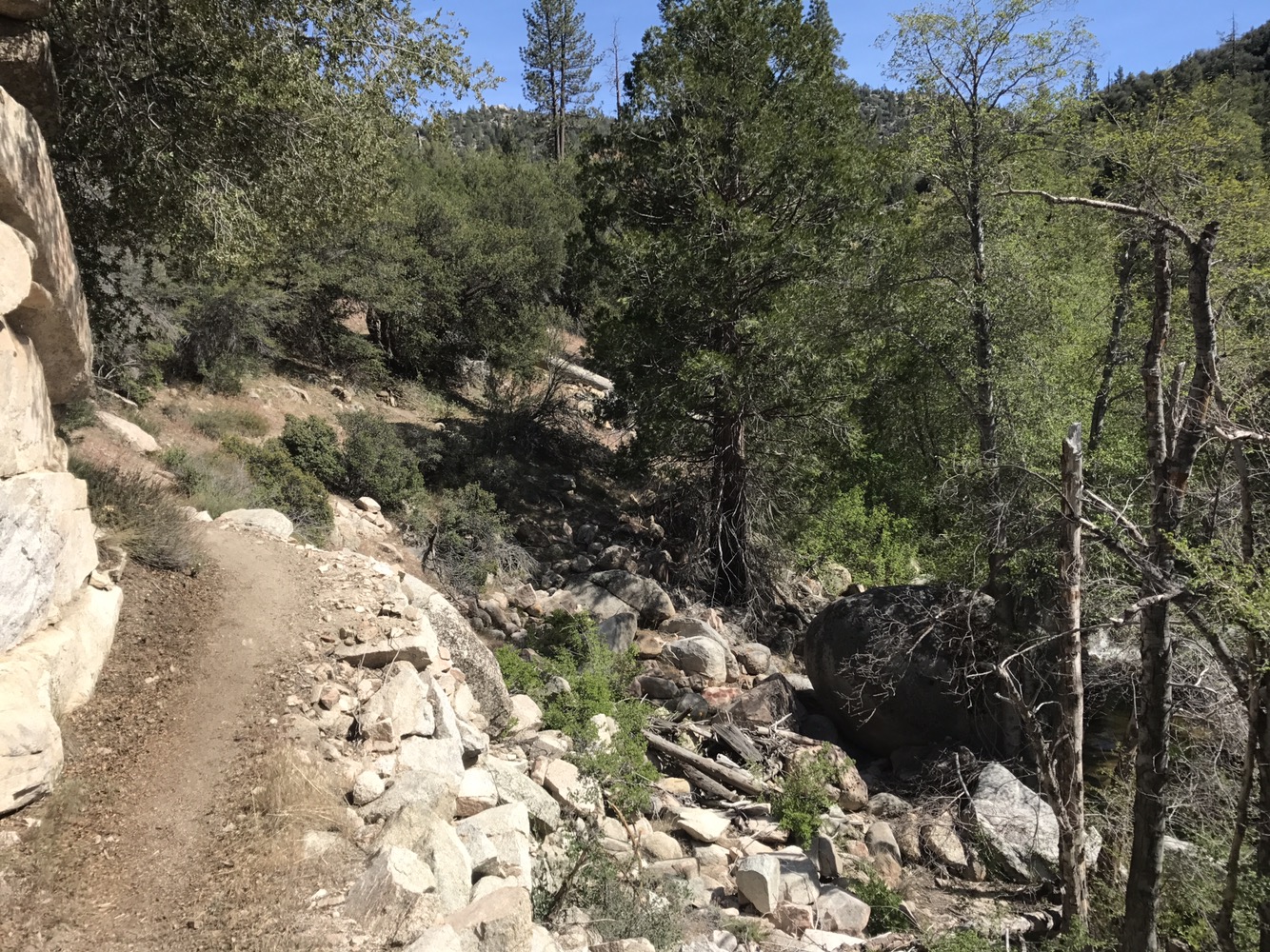 I catch Rawhide again at the water source, where she is sitting with Agnes and Francois. The school group is there and they’ve met up with a second school group headed the opposite direction. Maybe its a key swap? A man who is part of the school holds my hand as I cross a log on the river. I sit with Rawhide and we chat a little and then Agnes and Francois go to find a place to take a nap and I lay out my Tyvek and take a nap where they’d been sitting while Rawhide reads her book. I hear Rawhide start to put on her shoes so I get up and leave a few minutes after her.

I’m debating how to cross the river further down the trail when Mousetrap arrives. He figures out a way to cross on some rocks and then we hike together for a little ways until he decides to stop at a camp site.

A mile before camp, I see Rawhide sitting on a rock with her feet up. She’s having trouble motivating herself for the last stretch. I sit for a minute but then get up and keep hiking. She catches me just as we get to our proposed campsite, under the Deep Creek bridge. We look around and some other hikers tell us there are more people at Splinters Cabin just up the trail, not to mention there are bathrooms. We decide to hike there and find a large group playing charades. But we’re all business and we set up our tents and eat dinner. The school group approaches a little while later and they’re going to camp in their parking lot. We can still smell their hot dogs cooking when we climb in our tents.