This morning I woke up at 415. I’d been having crazy dreams so I was glad to have my alarm woke me up. It had been hot all night with little wind and it didn’t make for a pleasant sleeping experience.I wanted to try to beat the heat so eventually roused myself so that I was on the trail as soon as it was easy to see, around 530. I was the first one from our campsite to get out there, which I don’t love – I’m convinced that people who see rattlesnakes are the ones who aren’t part of the herd moving through. So early and especially late are no good.

But luckily, no snakes for me. Unluckily it was still uncomfortably warm even though it was first thing in the morning. Also, I noticed last night that I started getting a rash on my back from my pack, likely because it was so hot and I was so sweaty yesterday. It stung as I moved down the mountain. Also, I was absolutely fucking exhausted. I was basically sleep walking. As I moved down the mountain there were cool pockets of air and it took everything I had not to pull out my sleeping pad and collapse in one.

Lionheart passed and said she hadn’t slept well either which made me feel a little better. I noticed she had earphones in so I decided to follow her lead and put on some Beyoncé. That helped for a while but I still kept taking breaks. I ended up taking a break with a girl named Tori and she told me she’d put leukotape on her back rash where her pack was rubbing and it had worked perfectly – so in true hiker fashion, I asked a near-stranger to put tape on my rash. And she was right. It didn’t bother me the rest of the night.

About 5 miles in, Karma caught up to me. She was also having an off day and moving slow. We dragged ourselves to the water source, a trickling spring that was orange and tasted like bitter pennies. And then we laid in the shade there for hours. I made myself beans and rice. I took the nap I so desperately wanted. It was wonderful. But it was still hot – it was forecasted at 99 degrees today. There’s no way to get through that but to sit out the heat of the day, or to take it insanely slow. Who knew hiking all day involved so much lounging? 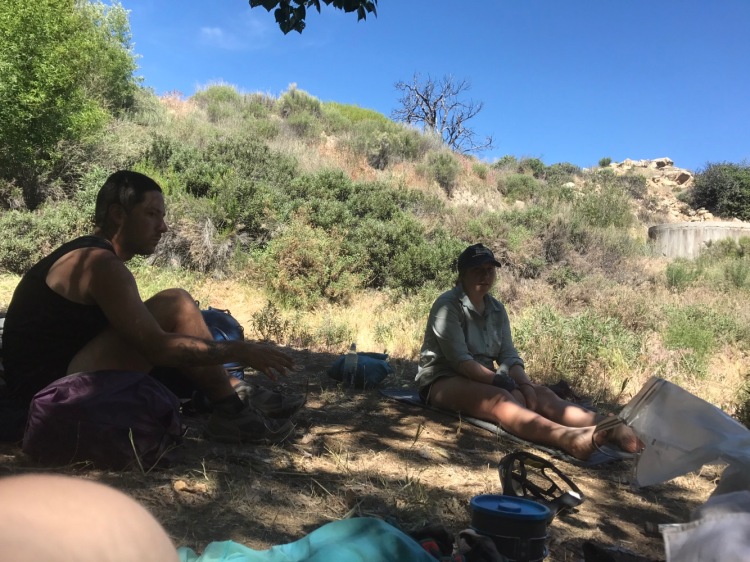 Around 2pm Twerk decided to hike out and take it slow the next 7 miles to camp. At 230 Karma couldn’t sit still anymore and did the same thing. Amelia left around 330. I repositioned myself in better shade and decided not to leave until 4 and Rawhide left with me.

It was so hot. I was glad to have my umbrella. Rawhide and I still took a couple of breaks waiting for the temperature to drop a little more.

We sat at the last bend before the big uphill climb. “Only four more miles,” she said. “I think my uphill is actually a little faster than my downhill,” I said, like an idiot. The trail proceeded to hand us some of the steepest climbing we’ve had to do yet, and we were loaded down with water because we’ve got another 8 miles to do tomorrow before we have another source. Rawhide quickly got way ahead of me.

So uphill, with water that tastes terrible (i flavored all of the water with Rawhide’s Mio drops to try to cover the taste – it only helped a little), 80 degrees out. Hiking is so fun sometimes.

It made me think of something another hiker had said earlier in the day when we were getting the penny water: It beats being at work. And as I trudged up the mountain I thought, sure, is it nice to be out living your dream, yes. But work had snacks. And air conditioning. And wi-fi. And taste-free water.

I don’t love hiking by myself at the end of the day because I drive myself crazy thinking about snakes and mountain lions, but the flies distract me from the possibility of snakes. I killed at least five flies directly on my face. I tell myself I’m just trying to get to the water cache, where I can get a morale-boosting clean liter of water. It takes forever, but I get there.

After that, the sun is quickly setting so I push myself to move quickly and get to camp.

I swing in with just enough time to set up my tent (poorly, I might add – the stakes aren’t exactly deep so I’m hoping the wind isn’t too bad tonight) and stretch slightly before crawling in my tent. I’m organizing my things when Karma says, “Do you need to pee or brush your teeth?” So I crawl back out and we walk and chat a little and it feels nice to feel like she relies on me a little, too.

On another note, the lizards out here are the size of rats. They’re big and black and run across the trail. I’ve never seen anything like it.

Tomorrow we’re hiking to Paradise Valley Cafe and then figuring out how we’re getting to Idyllwild. There’s a fire closure that would make us road walk for several miles and also makes you go in the wrong direction for a while, so many people are talking about skipping. I’m leaning toward wanting to do as much of the alternate as feels safe – road walks can be dangerous so I’m not against hitching there, but I’d like to at least walk until then. There’s also a storm system blowing in Sunday/Monday that has forecasted snow, and we have our first really big mountains after Idyllwild. So, all this to say, we have some figuring out to do.