Today I was sitting with a group of thruhikers and we exchanged a few niceties and then we almost immediately started talking about poop. I’m starting to think that we need a kind of Godwin’s law (Godwin’s law is that any conversation on the internet will eventually devolve into a conversation about Hitler) for thru hikers, except instead of Hitler, it would be poop.

Today we got our first resupply boxes from the Warner Springs post office. A sheriff was giving people hitches from the resource center. 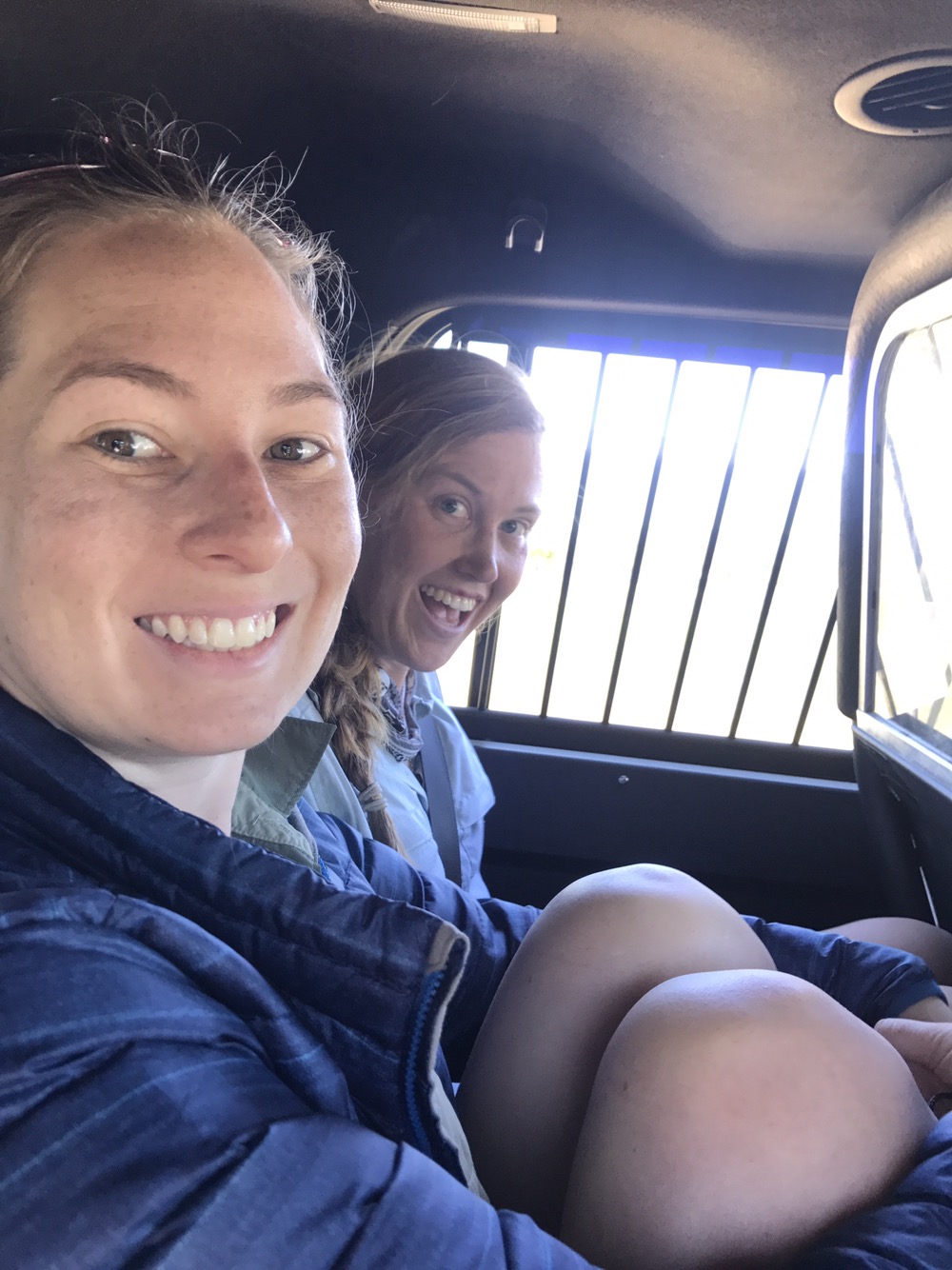 After we got our boxes we went through them and made some trades on things we didn’t want. I mentioned that I had beans and rice in my box and couldn’t help but say “beans beans the magical fruit…” and Karma said: Is that why you walk slow? So you can fart freely?

I about died laughing.

In my resupply box was also a three letters from people back home that I’d gotten (and not read) at my going away party. Mark put them in the box for me before I sent it off. Thank you Karen, Stephanie and Jenn!

We went to breakfast at the one restaurant in town. The waitress was slammed but we were so excited by the prospect of eggs and French toast and pancakes that we just sat there for as long as it took. It was delicious. No regrets.

On the way back to the resource center, who jumps out of an SUV with an open trailer but the doctor who told me how to fix my feet (Chris) and his brother Kelsey!

“You guys want a ride? Jump in the trailer!” 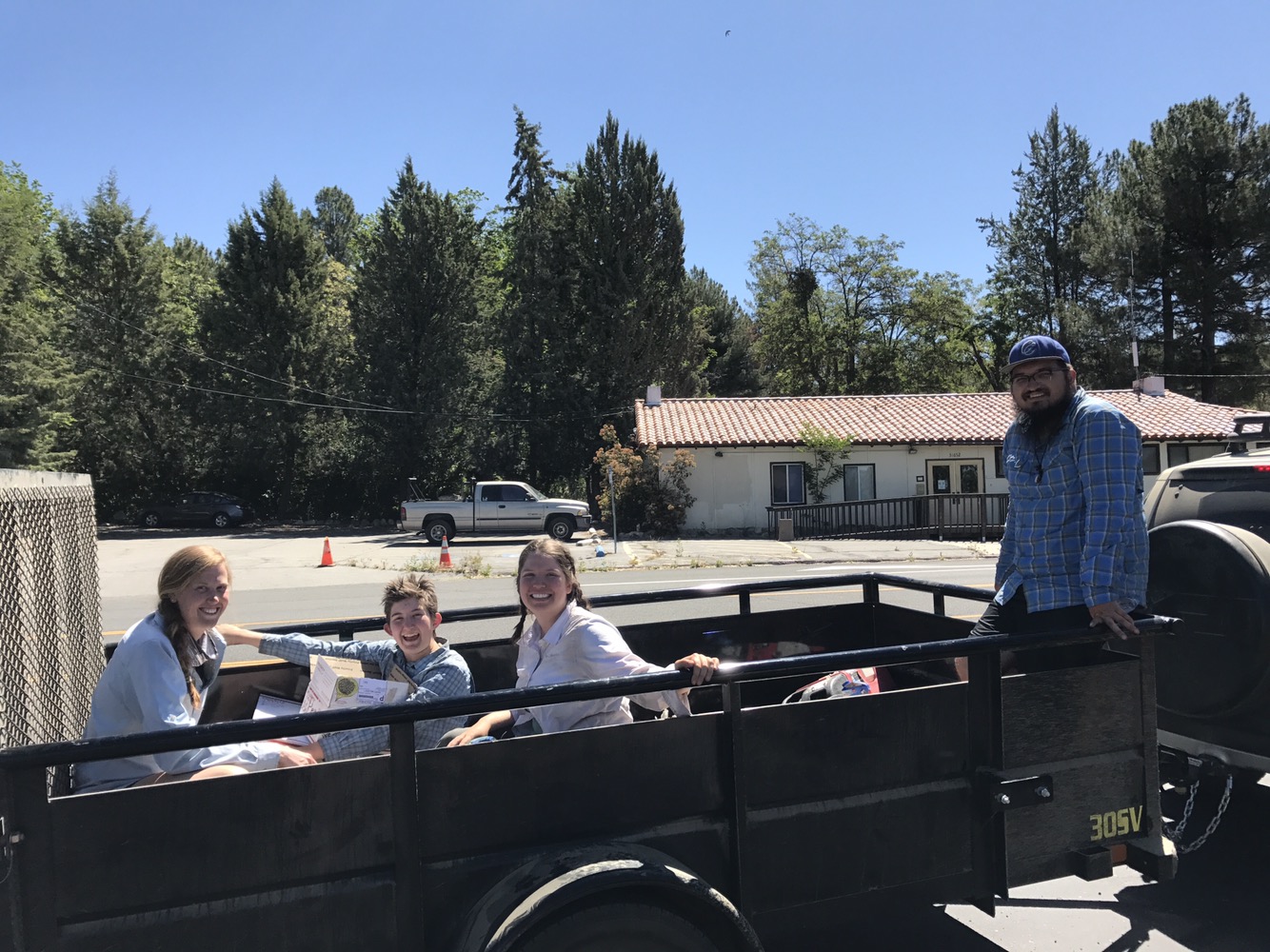 They’d gone to Temecula for the weekend and were picking up their resupply boxes before heading back out on the trail. Kelsey’s girlfriend was driving.

After that we kind of just kicked it around the resource center. We very slowly packed our food and gear. I stopped by 2 Foot Adventures, a small trailer gear shop that has been hanging out at Warner Springs, and got a Buff and got rid of my beanie. I also sent home my cup with my dad and the stuff I’d been carrying around for tea (shoulda known better than to think I’d take the time to make tea out here.)

After finally figuring out I had enough food to last the 5.5 days to Idyllwild, I also realized I didn’t have two critical foods: chocolate, and chips. Amelia needed to go back to the post office so we waited for a hitch and did that. On the way back, some locals in a truck picked us up. We got in the truck bed and held on while we rode – and eventually we were like… wait, did we go past the resource center? About the time we realized, so did the driver and turned around. Oops! Need to pay more attention. It’s amazing how kind and willing to help people have been to us.

Then we continue to lounge. It’s a hot day so we plan to only go 6 miles, and we’re waiting for the worst of the heat to pass rather than torture ourselves.

We’re sitting around a picnic table when Twerk says something about moms and I hear myself go, ha, mine wouldn’t care, she’s dead. I can hear how ugly it sounds, brutish and guarded. I’m sorry, Cathleen (Rawhide now, thanks to her thigh chafe and beat up feet) says. They ask me a few questions and I can hear the closed-offness in my voice, the unconvincing nonchalance. Nirvana talks about his friend having PTSD dreams and I tell him I dream all the time about my mom being alive and sick and trying to save her, but again I say it like it’s twelve feet in front of me instead of right in my chest.

We leave Warner Springs around 430. At first I’m trying to hike fast and keep a strong pace, but eventually Amelia and Karma zoom ahead of me and the hikers behind me – Tarantino, Kathleen, Nirvana and Baby Jesus – go past. I’m hiking in my own and it’s hard and I am feeling disappointed in my slowness and I decide to try to be less disappointed. To let the uphill be hard, and to take it at whatever pace feels natural.

I think maybe I’ll feel zen if I do this. Instead I think of my mom. I think about how we don’t really think about what we’re doing out here, we just move forward, how somehow I can think “I’ll be in Idyllwild in 5 days” and feel near-sure that will be true. I think about how my mom was so sure she would be okay. Maybe that was why it was so hard to watch her die. She was the sure thing in my life. She was the person I didn’t have to worry about, really, because she would always figure it out. She believed there was always a way through things.

Sometimes I like to pretend my mother sends me messages. A hummingbird. A feeling. Today while hiking I wondered if maybe she isn’t in all the beautiful things. Maybe she is the mosquito buzzing in my face, the lizards that sound like snakes in the bushes, the cheatgrass the clings to my socks. Maybe she is all those things and none of them. Incessantly here, and gone before I know it.

Sometimes I wonder what she’d be saying if she were hiking beside me. Today as the sun was setting I imagined it would be this:

“Look at the way the cactuses grow through the bushes, how the ants march in thick lines, the feeling of the sun releasing us slowly from its heat. Look at how no matter our pace we keep moving forward. And eventually there we are.”

So I cried a little and walked and then I stopped and got to camp.

At camp I am a little quiet. I’ve socialized a lot in the last few days and am tempted to get straight in my tent. Instead I stretch a little and make myself beans, rice, Fritos and tortillas. I sit with the group, now including two hikers I’d met before, Iguana and Shipwreck. Karma sits next to me and Tarantino next to her and as we’re chatting Tarantino accidentally farts and it’s so powerful it shakes the log Karma is sitting on. I laugh so hard I pee a little. Later, Karma and I trudge up a hill to pee before bed (I am still relying on Karma to make stupid simple decisions, but she seems to kind of like it) and she tells me how every time she squats in the woods she thinks of an episode of House where someone got a tick in their vagina and we laugh and laugh. Amelia says: Every night out here is like a sleepover with you guys. And it’s true. It is simple out here, and funny, and hard, and it is easy to forget these moments.

Tomorrow is the first of four 15 mile days we’re trying to do in order to get to Idyllwild quickly. There’s supposed to be a trail angel called Mikes Place around mile 12. We hope to wait out the sun there.