We’re doing an early morning hike tomorrow so I really should be trying to sleep.

Warning: Blister talk. Just spent the last hour trying to patch up my blisters. There’s a hiker on trail who is an expedition doctor in real life and brought a massive medical kit who told me that stringing a piece of thread through a blister to drain it and then leaving it (what I’d been doing per usual thru hiker advice) doesn’t quite work because the dry piece of skin just keeps rubbing away at the skin underneath and grows bigger – which is what has been happening to me. He said instead to cut away the blistered skin, neosporin, cover with a bandaid and then the stretchy stuff they put on your arm when you give blood. And that’s what he did with his massive heel blisters today. He gave me the necessary items so I’m gonna try his advice because my blisters really slowed me down today. I ended up hiking the last mile in flip flops. 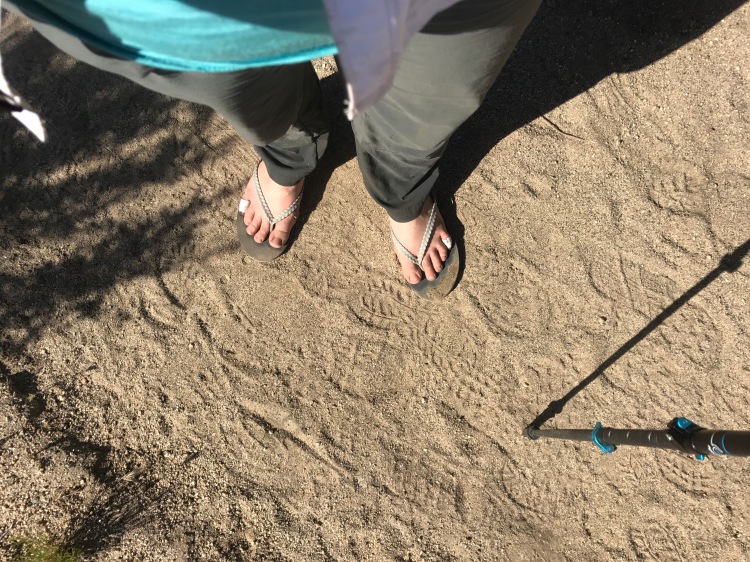 We climbed out of Hauser this morning which was hard but good. At the main top a group of us stopped and had a snack and chatted before continuing on. It took a while to get to Hauser. I came up with a theory that I’ve been working on – I’ve noticed that there is a balance between going slower and too slow. Too slow and every pain comes to the forefront of your mind and every step is a little harder. A good pace erases a lot of the minutiae of trail pain – muscles loosen, blisters hurt less, etc. This pace isn’t so much about going faster but (this is the theory) going happier – it has a bounce to it. It’s your play pace. It’s the pace you’d be going if you were having a little fun. I seem to do a decent job of finding this pace at the beginning of the day, but at the end I struggle. 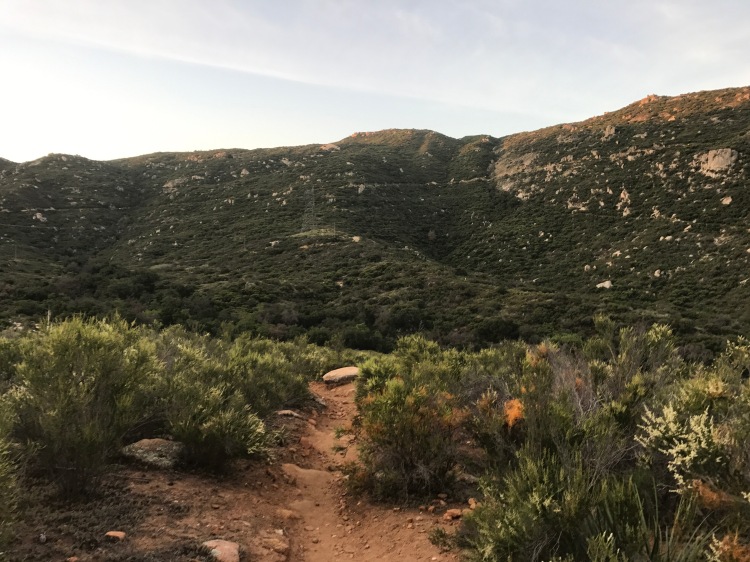 We got our first trail magic today. There was an unofficial kickoff at Lake Morena and Who’s Your Daddy and several other trail angels were there with coffee, bagels, fruit. They were giving shakedowns and several hikers left with lighter packs, and I left with some pretty cool stuff from the hiker box, including a resupply on medical kit stuff (which I have used extensively thanks to blisters), some flip flops for camp shoes (which are the flip flops I hiked in) and my dinner tonight, a spicy Italian pasta. I didn’t do a shakedown because I’ve been pleasantly surprised with my pack weight – in part because the desert has been so plentiful with water. I also grabbed lunch at the Lake Morena store and a few extra treats for the hike later. I went with Jelke and learned a little more about her – she was a civil engineer back home.

Jelke took off a little earlier than me and I hiked with Tommy, Chris, Cathleen, Alpo and Annie until my blisters slowed me down and I hiked on my own for a while. Not long after, Bruce came up behind me and I hiked with him, which took my mind off my feet and got me moving again. We talked about what motivated us to do the trail. Also, even though we’d split up by then, at camp later Bruce came to find me and asked how my feet were and then told me to talk to the expedition doctor and went with me, which was so incredibly sweet.

We’d read about ticks online being a problem this year. Amelia said she’d seen one on her toilet paper when she went to the bathroom in Hauser. Today when I was swapping into flip flops I swear I saw a bunch on the grass I was sitting in, so now I’m paranoid about ticks.

At one point before we got to camp we were all sat under a bridge with other hikers named Jeff, Rachel and Rachel’s friend whose name I didn’t catch. We ended up naming her friend Nirvana (it was a group effort) because he and Kurt Cobain have something in common (wearing mismatched socks? My sleepy brain can’t remember.)

We also named Annie today. Annie had found a can of green beans on the trail day one and like a badass, picked it up and has been carrying it. Her, Tommy and Cathleen have had plans all day to cook them with Tommy’s dried miso, so that’s what they did. Everyone’s been telling Annie that she’ll have good karma for picking up the green beans. Yeah, well, as soon as she took a bite, a bird shit on her head. So now Annie is Karma.

After we’d been sitting a while a hiker named Amelia joined our campsite. I think she’s the youngest person I’ve met on trail yet at 18.

Also, it’s creepy, but I realized I’d already been following a ton of hikers I’ve met on trail on Instagram. I just don’t want to get the trail name Stalker.

Tomorrow we’re getting up early early to try to push for Mount Laguna. It’s 16 miles all uphill.