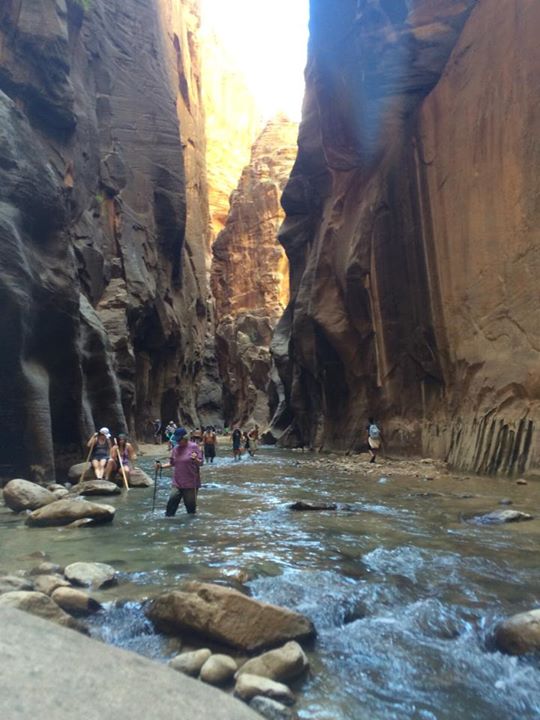 The brain holds on to memories but so does the body. This morning I drove alone to work and I was struck by the feeling, delirious with it, that I was headed to Utah, my mother beside me. I tried to figure out what it was – the sunrise ahead of me, the particular chill of morning on my thighs (the first time I’ve worn shorts in months), the fact that I’d woken up with Rhiannon playing in the back of my mind – but I don’t know.

I do know that as I drove to work I thought of the large, red walls of Zion, the white noise of a man-made water fall in my ear at our hotel, a sense of peace coupled with a new sense of dread.

Lately I’ve been asking myself, when did you know mom was going to die? Part of me says from the moment she knew there was a mass part of me from the moment the doctor called to say it was cancer but I think in truth, I didn’t know until I really knew, when I saw that she wasn’t getting better. I remember feeling like a fight was coming but that me and my mother would win, because we had always won. When she had an ulcer burst two years before and ignored it for three days, she lost weight and I saw her weakened body, the needles and tubes coming keeping her stable, I remember thinking, You made it. Of course you made it. In no world could the universe take you from me.

I think that stuck with me. I think I thought that it would be a hard fight, but of course we would win. How could we not?

I didn’t know that in Utah. In Utah I looked at her as this sure thing in my life. In Utah, in the particular chill of the morning, I didn’t think I could lose her. And I’m glad I didn’t know.