I flew into Siem Reap and got an in-person visa, where they took a scan of my passport, $32, and gave me a visa after waiting about 30 minutes in a crowd of people until they called my name.

This was the first time I hadn’t arranged a way to get to my hostel, which was about 20 minutes away, and so I decided to get a tuk tuk (open bench on two wheels on the back of a motorbike), which cost $9. It was so pleasant — the sun was down, it was about 80 degrees, the breeze was lovely. I swear the air smelled like cardamom (I asked a few locals, who didn’t know what I was talking about, and one of my tour guides did some investigating — likely another type of tree/bush/flower that smells similar).

Fun fact: In Siem Reap, the currency is part US dollar and part riel (local currency). Case in point: Most places would charge you in U.S. dollars, but if your change was $0.50, you would get the change in riel, or if they were short on dollar bills, same thing. Even the visas were paid for in cash USD.

Got to my hostel, cranked down the air conditioning and passed out.

The next day I was still feeling like I didn’t really want to experiment with food, so I ordered breakfast and lunch at the hostel. I wandered Pub Street and Old Market for a little while, buying tiger balm and a few postcards.

The whole purpose of going to Siem Reap was that I wanted to see Angkor Wat, or more accurately Angkor Park, which is a group of some 300 temples that are nearly 1,000 years old. Tourists have been going there since the 1990s, but Tomb Raider really skyrocketed the number of visitors.

Everyone I’d spoken to about visiting recommended a sunrise tour, but I also wanted to see the sunset, which ended being perfect — there are two main routes to see the temples, and each one is a full day’s worth. A sunset tour (which I started at 1:30 pm) meant I could see most of the smaller loop, and the larger loop could be seen during the sunrise tour.

The hostel I was at didn’t offer any sunrise guided tours, so I was signing up for a private tuk tuk when another girl, Maria from Brazil, walked up and joined in, which cut the price of the tuk tuk by half.

Before we left, Maria reminded me that shoulders and knees have to be covered at the temples so I ran back up and changed (I was in shorts) but all I had was pants, so… pants it was. It was a fun day, and it wasn’t nearly as hot as I’d heard people complain that it could be, though I was definitely sweating. The heat was a lot dryer than Vietnam, which made it more tolerable.

Folks are really persistent about trying to sell you things as you walk into the temples. The other surprise is one of the police officers inside the temples got really into taking Maria and my photo, telling us to stand in specific places, taking panoramas, posing us, etc. and at the end asked for a tip (I gave him $3). I’d heard about police officers sometimes offering to help you only to push for money in exchange, so I’d kind of caught onto what he was doing. 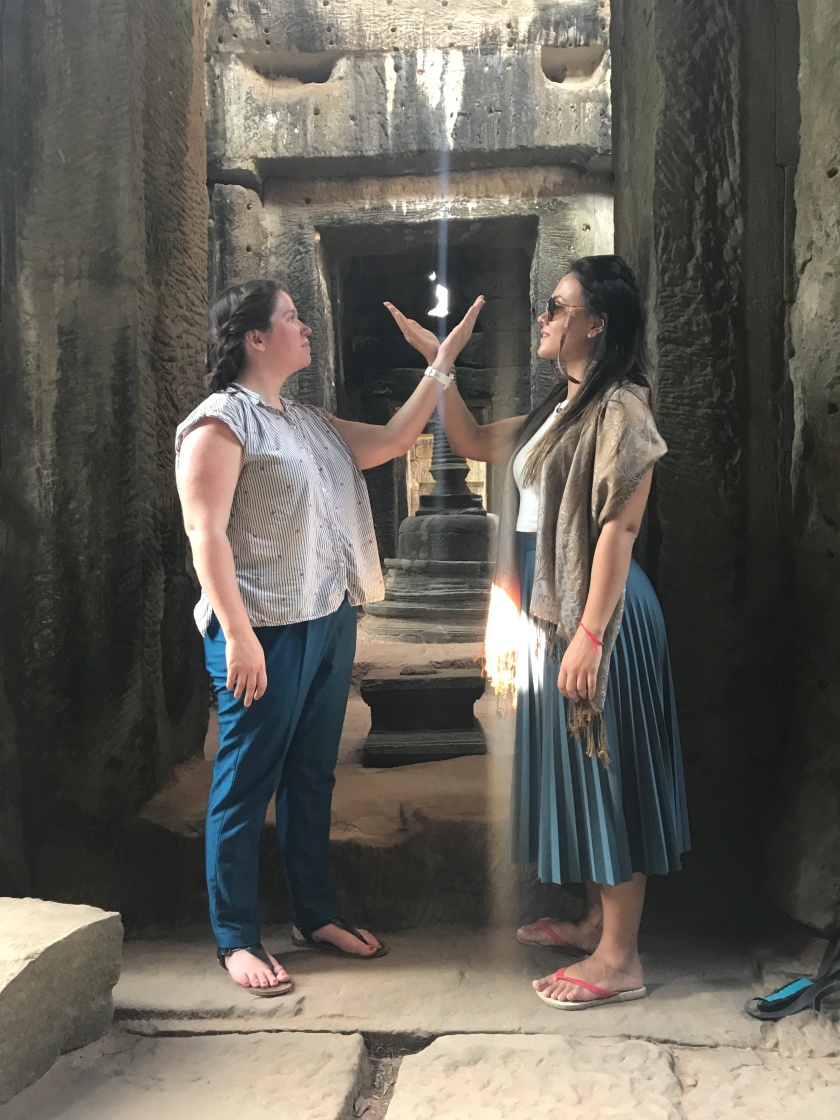 One of the photos the police officer took

Sunset wasn’t a huge glow of colors, but it was still beautiful. And crowded. I’d decided I had enough pictures of the day and instead hung out and people watched and thought about how we all ended up here, at a temple that got shifted between Hinduism and Buddhism, all of us still chasing a sunset worshipping who knows what. Our cell phones, some would argue. The last slips of light on a horizon. History. Travel. Self-creation.

The next day was a 4 a.m. wake-up for the guided sunrise tour. We skipped breakfast in order to try to beat the major crowds. Of course, there were still tons of people at sunrise, but with very little planning I managed to crouch down in the very center of the Angkor Wat reflection and take about a million photos. Two people with big tripods were next to me, a man narrating the whole thing suggesting white balance changes and ISO and shutter speeds.

“Dang, I don’t think I’m going to get anything today,” he said. I looked at my own photos (mostly blurry, as I hadn’t practiced with my tripod before) and the sunrise in front of me. And… perspective is weird, I guess. In my hands were photos of Angkor Wat. A beautiful sunrise over a beautiful temple with a beautiful reflection in the water. A place I’d never been and will likely never be again, stepping into the light of the morning the way it had for hundreds of years, a whole human history I now, briefly, got to be a part of.

But also: I get it. Looking at everyday beauty — even the kinds people travel across the world for  — and shrugging. Seeking bigger returns, the dopamine of newness, the urge to make something that hasn’t been made before.

The last weeks of this trip I feel like I’m starting to remember something about slowness. I spent 2018 running from one place to another, high on the adrenaline of trying to fit in everything I possibly could. This trip was, in some ways, supposed to be an antiviral to that. I wanted to remember what it was like to stumble upon things rather than seek them out, to revel in small things. But mostly I have been running around, high on the adrenaline again. Or trying to make a plea deal with the judge in my brain, You’re here, you shouldn’t be resting. You’re here, you should go on every possible adventure. You’re here, you’re going to regret it if you don’t…

The language we use as travelers feeds into that, too. “You skipped Ninh Binh? But that was the best part of our trip!”

“You came all the way here and all you did were the temples? What about the floating villages? The monk blessing? The local dance?”

However much I do, I am always missing something. And then there is me on the back of a tuk tuk, the air a mixture of gasoline fumes and cardamom, the warm air blowing against my skin. Most of the things that have pierced me have happened between the itinerary, when — quite by accident — I gave myself the chance to breathe.