Today was an early early start. I set an alarm for 4 am but woke around 3:30 and looked at the stars through the mesh of my tent until it went off. Then I called out to the other hikers to wake them up. Rachel and Nirvana were off by 430, Twerk and Amelia shortly after, then me and Karma. We had to make it 13.5 miles in order to hitch to Julian and we wanted to do it before the heat of the day. We also figured it would be a good day to hit our first “10 by 10” – ten miles by 10 am, something a lot of hikers aim for particularly later in the trail when the heat is intense (they then break until later in the day to hike the rest of their miles.)

We hiked the first hour in the dark up a steep climb. Shortly after we caught up with Twerk and Karma sat down to have breakfast. I pushed on and hiked with Amelia (she’s considering the trail name Random) while eating some crackers as breakfast on the go. 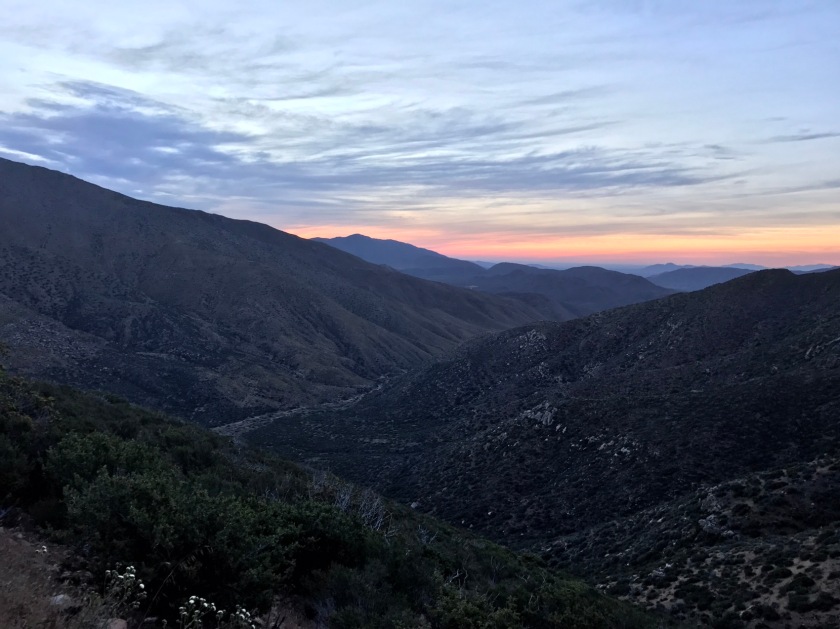 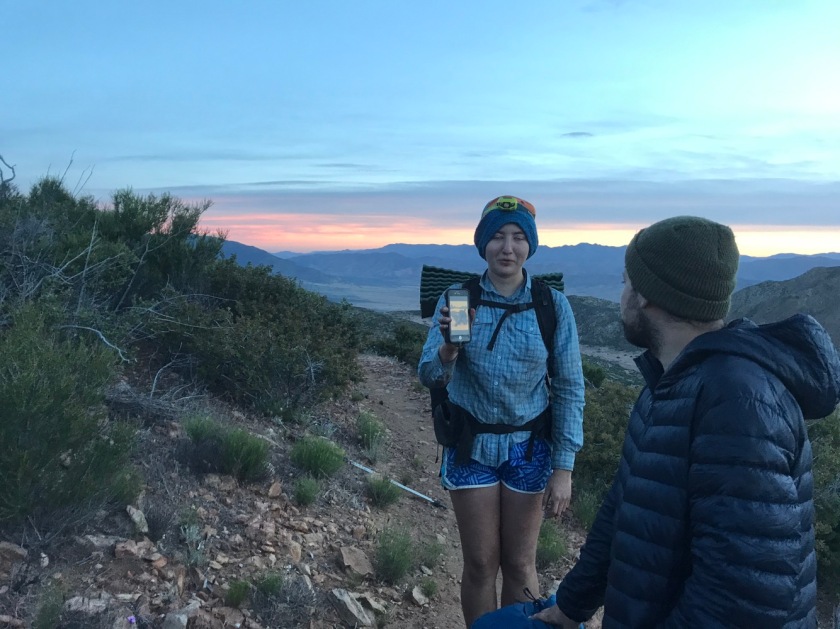 I also had a couple more suggested trail names today – Zippity Do Da, because I’m usually pretty upbeat and happy in the morning, and 3 Bar, because I’m always checking for cell service at breaks. Neither of them felt quite right, although 3 Bar made me laugh quite about. 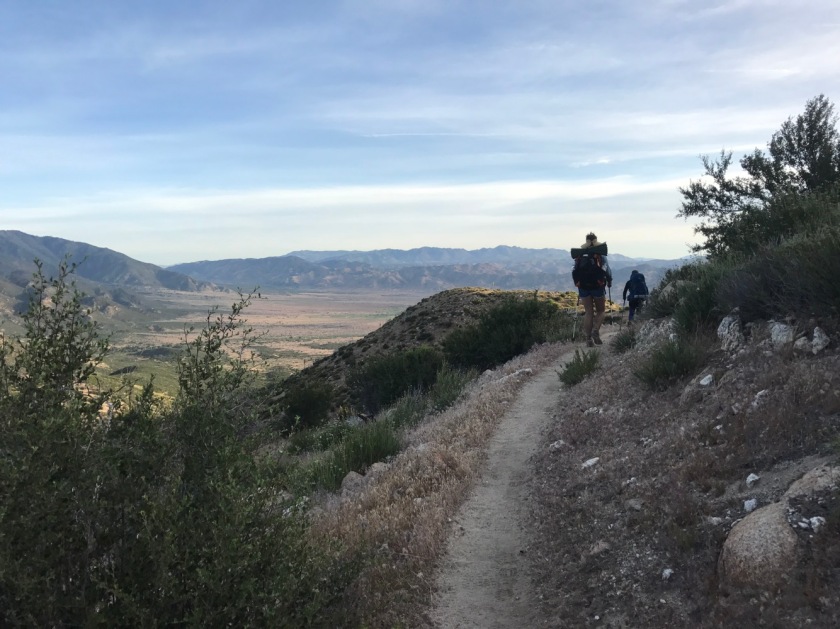 We are still slow and only made our 10 by 10 with about 15 minutes to spare despite starting at 445 this morning. Afterward we trekked on. I started singing on the down hill – Bob Dylan, Jim Croce, Willie Nelson, and then my favorite standbys, Disney songs.

I used to live in Shelter Valley and went to middle school for a year in Julian, so it was kind of a trip down memory lane to be back here. The school looks really similar to how it did 13 years ago, and the town seems even smaller than it used to.

We got to Scissors Crossing around 12 and it took a while to get a ride but eventually got one from a Julian local named Connie who was dropping some other hikers off. She said she tries to give hikers a ride a few times a season. Connie had wanted to live in Julian for years and finally did after her children grew up and she got divorced – she spends her time enjoying her house and garden. But she’s a hiker for sure. She’s done Whitney a handful of times as a dayhike (a 22 mile round trip at altitude.) Really wonderful lady, and all four of our group were able to fit in her car.

We got to town and immediately went to the lodge, who let us check in right then and there and even charged us all four separately and gave us a hiker discount – which meant it was only about $35 a person for the four hikers they would allow. They had a note to PCT hikers about the white linens and some other notes the receptionist went through.

It was a weird feeling because it was the first time we’ve really been treated “different” than in our old lives – people can spot us as dirty hiker trash, but we barely feel like hikers yet! We got settled in (being careful not to touch the bed or towels), took showers (scrubbing the thick dirt off myself I understood the receptionists’ concerns – you don’t realize just how dirty you are until you’re in a white tub under clean, running water) and put on our sleep clothes or the least dirty of the clothes we own. All of us are a little sunburned – Karma and Amelia’s legs, Twerk’s face, my face and hands.

After we were clean we grabbed lunch ad Soup and Such which was DELICIOUS. I had so much food – a salmon sandwich with fries (omega 3s and protein for my aching legs), a cup of Thai chicken soup (good fats and one of my favorites) and a salad (fresh greens!) 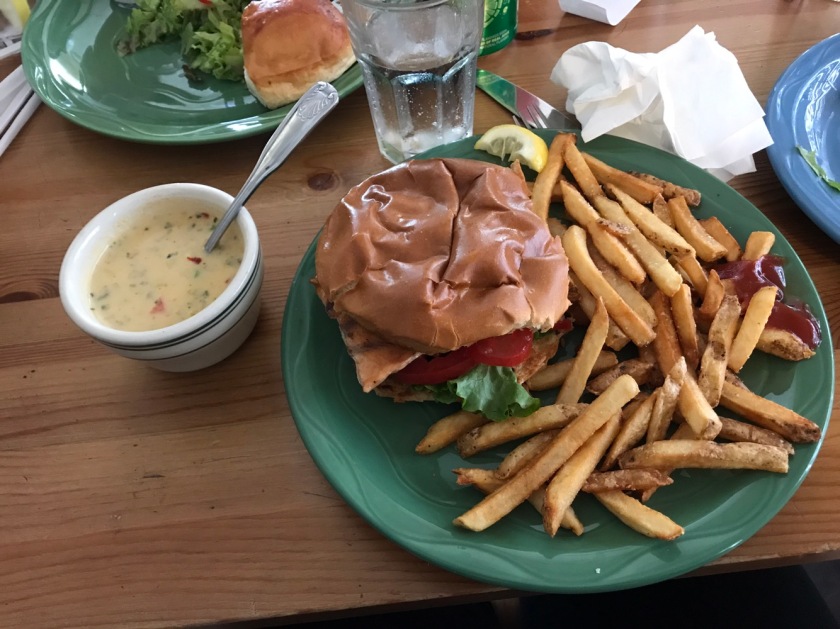 The waitress, Becky, told is that “we love you guys [hikers]” and I was a little surprised she could spot us even after we were totally clean – but maybe Twerk’s short shorts and puffy jacket gave us away.

After we ate (and still somehow weren’t stuffed) we went over to Carmen’s, who is one of the most amazing trail angels. She hugs every hiker that comes in (a good, real hug, too, something we don’t get much of out here), lets hikers sleep on the porch of her restaurant, gives them a beer and lets them do laundry and soak their feet. We went over to do our laundry. Our clothes are so, so dirty. We put them in and met up with Rachel and Nirvana who we let grab a shower at our room (shh). Amelia, Karma and I went to the two small grocery stores to top up or to a full resupply.

I only did half of one because my brain wasn’t fully present and it’s really hard to figure out exactly how much food you need with half a brain. So far I’ve been doing a really good job of choosing exactly the amount of food I need to make it to the next resupply, which is good because it means I’m not carrying extra weight. It also makes me extra motivated to get to the next town, haha. After that we went to Mom’s for free pie, ice cream and coffee – such an incredible gift, and so so delicious. 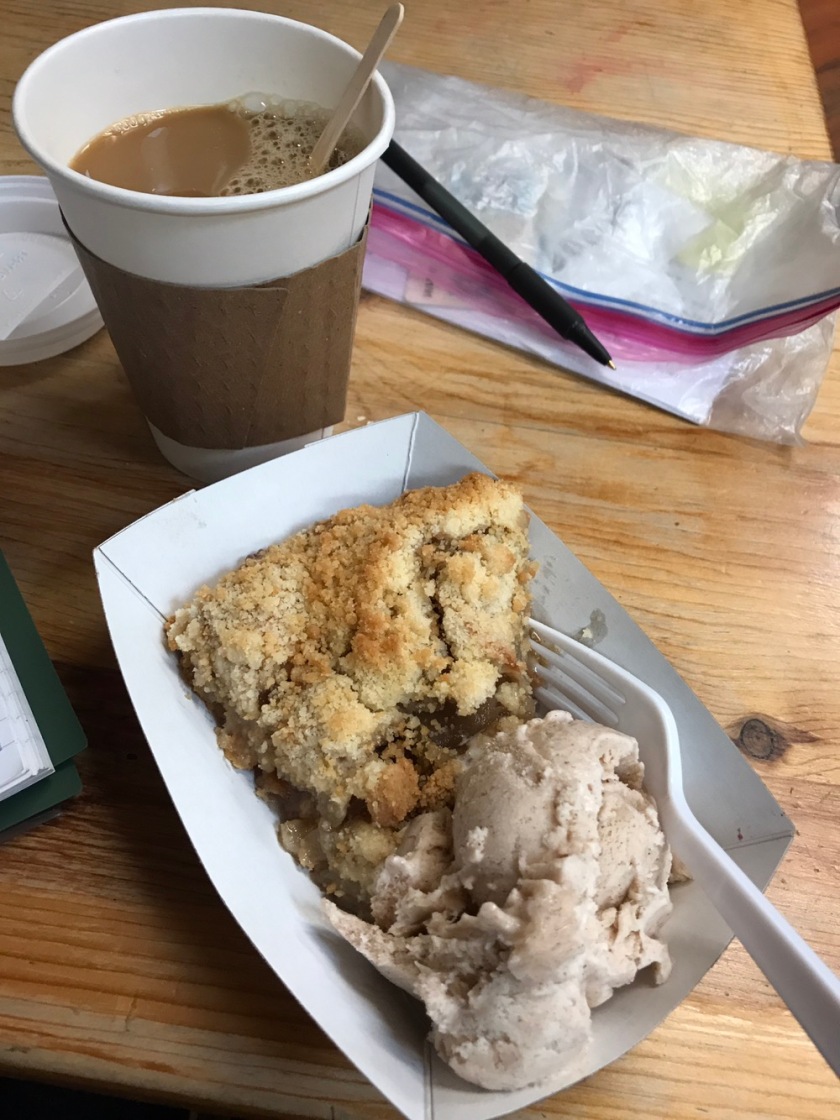 We then went back to Carmen’s and got our laundry (my clothes still look dirty but I’m happy to have the worst of the salt and the smell out of them) and went to dinner. We probably should have skipped dinner or waited or gotten something smaller, because both Karma and I could barely touch our very big plates of pasta. We took the leftovers though so maybe we’ll heat it up before we leave today.

Karma is quickly becoming my favorite person. She and I fall into lots of fits of laughter (usually started by me, I’ve gone a little hysterical out here and keep nearly falling over in laughs – I nearly fell down the stairs watching Twerk grip the stair railing for dear life and do one step at a time because he was so stiff. The hiker life is pretty funny to me I guess) and she left more messages in the trail today that were a huge pick me up – “food!” “Bed!” “Shower!” “U rock!” “(Heart)” – mostly before hills when I needed them most. And once I was thinking, man, Karma, I could really use another message and then bam! There was one a few steps ahead. She can also eat – a trait I love in girls – she ate a big meal for lunch like me and she’s eaten so many of my snacks she has an internal nickname of “Mooch.”

And then tonight she gave me a calf massage. My calves were really killing and they are pretty stiff too, and Karma worked magic on them. I couldn’t be more grateful. It was also a good reminder that i need to take some time to send some love back to my body out here and not just expect it to push on.

Speaking of which, I am pretty amazed at my body. We’ve done 15, 12, 16, 14.5, 7, and 13 miles with big packs and often in the sun and my body, despite the many aches, has stepped up to do it. Those are bigger numbers than I had any right to expect, especially since we are still growing our “trail legs.” A few people have talked about trying to ramp up to 20s, but I’m not there yet. I think I could do it but I also think it would ruin me for hiking for a day or so after and that’s not what I want to do at this point.

We’re going to aim for 2.5 days to Warner Springs, which is at mile 109. We’ll probably hang around Julian until the early afternoon and then do a late hike/night hike 8 miles in to our first camp spot and take it from there. It’s a long stretch without much in the way of water except for caches, so we won’t want to dawdle. But we have Eagle Rock to look forward to on this stretch and Warner Springs will have a resupply for us, as well as a tiny gear shop – I’m pretty sure I lost one of my socks doing laundry, so I’ll be stopping by. After that it’ll be my longest food carry yet (5 or 6 days) so I can expect my pack to be pretty darn heavy.

It sounds like Farkle, Alpo and Cathleen are at least a day ahead of us. It would be nice to catch them again, but that’s what the trail does – you make friends and then they move on before you know it. But there’s always more hikers to meet and friends to make.

I will say, coming to town, it does seem strange that we’re not staying here and instead are going back out to the desert. In fact, it feels strange that we’ve already been living this life for 7 days, that we’ve only just met each other and we’re already making plans with each other, that we’re already sharing so much about ourselves, that our journey has only just begun and yet also for most of us been the longest hiking trip of our lives so far. But the reality is we’re busy, and so we don’t stop to think about the strangeness very often. We mostly just figure out the next moment, and hike.